Opinion: How our pandemic walking habits could boost the economy | Business| Economy and finance news from a German perspective | DW | 28.05.2021

Opinion: How our pandemic walking habits could boost the economy

Meeting a friend for a socially distanced walk became the hallmark of social life during the pandemic. Maintaining the habit would be good not only for our own health but for that of the economy, says Kate Ferguson. 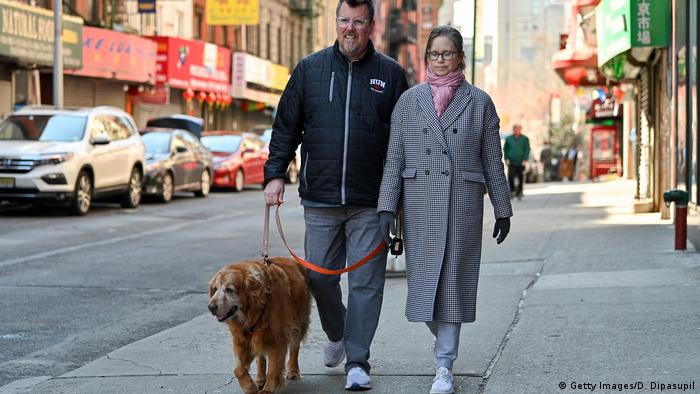 Going for a walk can't do any harm, and your dog won't complain either

Throughout the pandemic, my social life has resembled that of a Jane Austen character. Shunning the beady-eyed gaze of ballroom or — perhaps more accurately — barroom society, I and a carefully selected other meet in picturesque surroundings.

Our encounter begins with a friendly nod and the taciturn acknowledgement that if circumstances were different, we might risk an embrace. Instead, we walk side by side, at a distance, remarking on the beauty of the flowers, the pleasant melody of birdsong, the undeniable scent of spring in the air.

I'm not alone in this habit. Since the coronavirus struck, millions of people around the world have been meeting each other for walks. Often the only safe and permitted way to socialize, it has drawn renewed attention to the need for green space in urban areas, and better accessibility for people with impaired mobility.

It has even led to some rather unlikely social media phenomena, including an Instagram account called "Rate this bench," where a young man posts detailed reviews of the benches he encounters on his walks.

The physical and mental benefits of walking are well-documented. Those who take regular strolls lessen their chances of developing a whole host of conditions from heart disease to type 2 diabetes.

A study by researchers at Stanford University concluded that the mere act of walking provides a significant boost to creativity. In ancient times, people knew this intuitively. The Greek philosopher Aristotle is said to have paced around while delivering lectures. Today, social media mogul Mark Zuckerberg is known for favoring meetings that take place on foot.

The economic benefits of walking tend to get less attention but they too are substantial. A 2019 study published in the American Psychologist, which examined tax data from 10 million Americans, identified the walkability of a city as a key factor in determining the potential for economic mobility.

Individuals whose parents' income was in the lowest fifth of the wage distribution were significantly more likely to rise to the top five by age 30 if they lived in a walkable city. A major reason for this was that the cost of a car was not a barrier to accessing jobs.

Unwalkable cities are an especially big problem in the United States, where transport is the second-highest source of individual expenditure after housing. Frugality gurus like Mr.Money Mustache, who advise people on how to achieve financial independence and retire early, consider expensive cars and unnecessary driving to be key factors in entrapping Americans in avoidable cycles of debt.

For many people, the pandemic has unwittingly presented an alternative. As employees began working from home, the idea of the 15-minute city gained traction.

The concept is simple: Everyone should have access to essential services within a 15-minute walk or bike ride. Advocates point to both environmental and economic benefits.

According to a study conducted on behalf of Transport for London, areas that are friendlier to walkers and cyclists attract more retail spending.

The authors attribute this to the fact that walkers tend to spend more time on the high street than those who get there by car. Businesses in turn find it easier to recruit staff when their premises are easily accessible.

No walk in the park

Transforming urban sprawl into idyllic 15-minute cities requires significant investment. But the benefits will almost certainly outweigh the costs. After the pandemic, governments will have to revert their attention to the biggest existential threat of our time: climate change.

Designing public space in a way that encourages us to pollute less, buy locally and exercise more can surely only be a good thing. After all, as any 19th century literary heroine can attest, long-term commitment isn't always a walk in the park.