Opinion: Hertha Berlin's gesture is about the message

The biggest question from Matchday 8 in the Bundesliga was not who won and lost, but whether Hertha Berlin's 'Take A Knee' gesture was a genuine show of solidarity or a PR stunt. DW's Jonathan Harding gives his view. 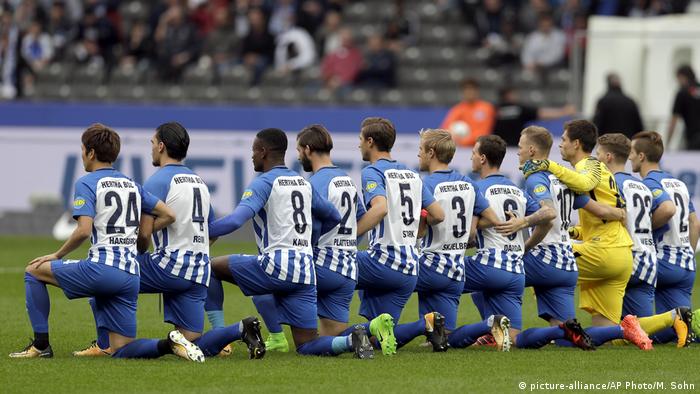 One glance at the widespread international coverage Hertha Berlin's act of solidarity for the 'Take A Knee' movement has received, and there's no doubt the club's marketing department will be smiling when they go into their next meeting. Hertha's name is spreading around corners of the Internet that didn't care for or know it just days before.

But so is a message of solidarity from a club in one of the world's most multicultural and important cities. It is a message that supports diversity and opposes violence and discrimination. Hertha's stadium announcer said: "For a tolerant Berlin, now and forever" as the players knelt at midfield. Berlin is a tolerant city in many ways, and so is Germany, but both city and country (and the world for that matter) are far from winning the fight against racism, violence and oppression. The publicity of these values is needed.

If Hertha focus solely on marketing figures rather than the message, then the club will rightfully have to answer for their approach. If the club takes this show of solidarity and turns it into more work in the community to combat racism and violence, then that will go some way to silencing the belief that all Hertha have done is ride the social media wave of a hashtag.

But the gesture alone matters. Because it's Berlin, because the time to be silent has gone, because the issue of racial oppression is a global one.

Hertha Berlin's players don't come from the same world as NFL players, but in some ways that makes their support all the more important. Germany doesn't face all the same issues that former San Francisco 49ers Colin Kaepernick originally protested against — police brutality, criminal injustice and the oppression of people of color — when he first knelt in 2016, but Germany is also a country where people are free to protest or share solidarity with those who suffer. Don't we want a world where people reach out from one side to the other to offer their support?

Sport has long been part of the political landscape. Sporting protests by the likes of Jesse Owens, Tommie Smith, Muhammad Ali demonstrates that sport is of interest to the world because, at its core, it still represents community. It still matters to millions of people around the world.

If sports teams like Hertha Berlin want to use its audience and location as a capital city to transmit a message bigger than themselves and the sport they play, then the world stands a chance of being a better place.