Alexis Tsipras started off with a bang, which has triggered major concerns in the EU. Terminating a foreign policy consensus to get Brussels to relent on a financial deal is the wrong strategy, says DW's Bernd Riegert. 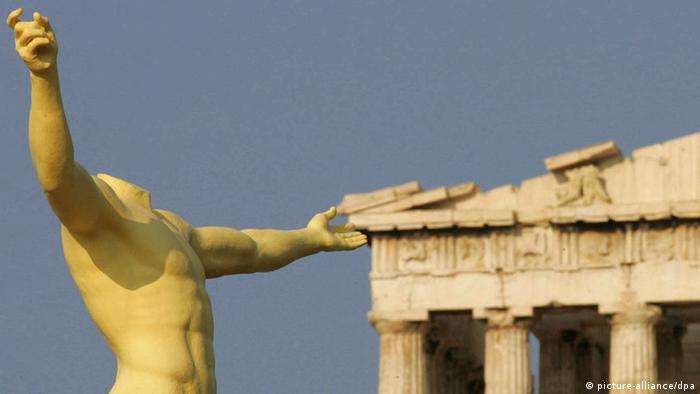 Just hours after forming a government, Alexis Tsipras started his first major quarrel with the rest of the European Union. He is not willing to sign a joint declaration by the EU's heads of state and government on possibly toughening economic sanctions against Russia in the Ukraine conflict.

Is this a beginner's mistake or a serious political strategy by the radical left Syriza party? Either would be highly alarming.

It can't be ruled out that the new government in Athens wasn't familiar with the procedure of written consent for speedy decision-making among the 28 member states. Or did the letter from Brussels asking for approval to threaten sanctions get stuck somewhere during the transfer of ministries? Members who don't object within a certain period of time give implicit agreement. That's customary among the 28 EU member states - and something the new left-wing/right-wing Greek coalition should learn fast.

It was a calculated move, DW's Bernd Riegert says

As Alexis Tsipras picked up the phone to personally complain to the EU's foreign policy chief about the alleged disregard for Greece, one has to conclude, unfortunately, that it was a politically calculated move.

Tsipras is terminating the previous foreign policy consensus so he can exert pressure in support of his own interests. Only if the EU agrees to his demands for improved conditions concerning the billions of euros in the bailout for the Greek budget will the new Greece agree to the EU's other political decisions.

Not just in sanctions do EU leaders need unanimity, but also in trade and budget matters. Clearly, there is a certain potential for blackmail.

With his decision to immediately carry this conflict into the public, Tsipras places the ball in the court of the other EU states.

It would have been smarter to first find an internal solution for the dispute. Now, Russia is receiving the message that it is easy to drive a wedge into the EU's phalanx formation.

During the election campaign, Tsipras spoke out against harsh sanctions on Russia. Some members of his Syriza party are said to be very close to Moscow. So far, Europe's unanimous stance in opposition to Russia's aggression is one of the few trump cards the EU has in the conflict over eastern Ukraine and annexed Crimea. The new Greek government is canceling that consensus, and that could plunge the EU into a dire political crisis.

The European Union has always faced political blackmail by members interested in pushing through their own economic interests. Within the bloc, many governments have resorted to the instrument - the difference being that Alexis Tsipras is acting from an acutely precarious economic situation and has no allies in the EU. His behavior is awkward and unprofessional. Greece needs the EU, so efforts toward reaching a consensus and harmony are called for. At the very latest at the first summit in two weeks' time, the other heads of government and state must put the recalcitrant revolutionary in his place.

It also wouldn't do any harm if Chancellor Merkel made a phone call to the new troublemaker in Athens, either.

Greek Prime Minister Alexis Tsipras has ruled out a rift with international lenders, saying his new cabinet wants only a 'fair' solution. His team has stopped the privatization of Piraeus, Greece's biggest port. (28.01.2015)

Opinion: How the EU and Tsipras could work together

The new Greek prime minister is making excessive demands on the country’s international creditors. But maybe he's the only one who can make the changes Greece needs, says DW’s Christoph Hasselbach. (28.01.2015)

Though Greece's economy was slowly improving, many voters had run out of patience. Less than 24 hours after polling stations closed, leftist Alexis Tsipras has become premier. Joanna Kakissis reports from Athens. (26.01.2015)