The recent catastrophic flooding across the Rhine basin and into Belgium and the Netherlands must be taken as a warning by countries across Europe and elsewhere of the increasingly urgent need to do more to adapt to and prepare for climate change.

The full cost of the damage is not yet known, but repairs are likely to run into billions and take many months.

While it is too early to know precisely the extent of climate change, scientists fear that damage caused by emissions is producing even worse extreme weather events than predicted. Brutal heatwaves seen recently along the western seaboard of the United States and Canada, as well as in Siberia and other parts of the world, are further evidence of an increasingly hostile climate — and the need to adapt to it, fast.

The pictures from Germany underscore the dangers that climate change poses even to the world's most advanced economies. While Europe has done more than most to attempt to mitigate the risks — the European Commission recently proposed the most ambitious package of climate measures yet by a major economy — these will not reverse changes that have already happened. Carbon dioxide lingers in the atmosphere for about 100 years.

A certain amount of warming — and the extreme weather events associated with it — is already baked into our future making adaptation a necessity even if the Paris Agreement targets are met. Scientists warn that the recent floods and heatwaves are not the new normal, rather they herald the end of a stable climate. And without action, according to the World Bank, up to 132 million people could be pushed into extreme poverty by climate change by 2030. 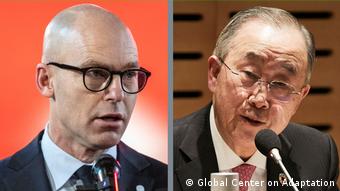 These warnings must urge us into faster action, with more funding, to adapt and find ways to work with the natural world rather than against it.

By accelerating investment today, we can prevent billions — even trillions —worth of economic damage and save many thousands of lives. A Global Commission on Adaptation report found that investing $1.8 trillion (€1.5 trillion) globally by 2030 in just five key areas, including climate-resilient infrastructure, such as stronger dams and drainage systems, and early warning systems could generate $7.1 trillion in total net benefits.

Some excellent climate-resilience projects already exist. In Germany, the new district of HafenCity within Hamburg is being built on raised plinths, lifting the whole area at least eight meters above sea level. In the Netherlands, engineers have been working on "Room for the River," a program to widen and deepen the rivers Rhine, Meuse, Waal and IJssel to protect nearby cities and towns. Besides creating additional water channels, flood-prone buildings have been removed and additional storage basins created with farmers co-operating to allow agricultural areas to be flooded as required.

On their own, however, these projects are not enough. One of the greatest challenges of climate adaptation is that responsibility spans many diverse authorities, at the local, regional and national level.

This makes it imperative that we share successful strategies and transfer knowledge and solutions wherever appropriate. To understand the scale of action needed, as well as measure success, governments and the private sector must carry out climate vulnerability assessments and stress tests to evaluate the risk of damage from flooding and heat stress. They must incorporate the resulting data into planning and investments, and closely monitor progress toward greater resilience.

These recent extreme weather events have shown that the climate emergency is an all-of-society and all-of-world problem. It is encouraging to read that the US and the EU are planning to increase their contributions to help developing countries fight climate change, but all developed countries must now deliver on their promise to jointly mobilize $100 billion a year in finance for both mitigation and adaptation in developing countries.

As the floods in Europe and China have shown, we need to accelerate adaptation efforts worldwide to ensure we are as well placed as possible to deal with whatever our newly unstable climate unleashes next. And we need to do it now.

Ban Ki-moon is 8th Secretary-General of the United Nations. Patrick Verkooijen is CEO of the Global Center on Adaptation in Rotterdam.

For a long while now, there has been talk of a drought in Germany; now, many regions have been deluged with water. How do authorities prepare for these two extremes?

Opinion: World Cup every two years is money over meaning 15h ago