Opinion: Germany′s Africa Policy Must Pay Heed to Globalization | Europe | News and current affairs from around the continent | DW | 15.01.2007

At the end of his trip to Ghana, German President Horst Köhler called for a real partnership between Africa and Europe. DW's Ute Schaeffer says Germany and Europe urgently need to rethink their policy towards Africa.

Ghana -- the country that German President Horst Köhler just visited for four days -- is for African standards a model state. The country's progress, however, is still governed by foreign factors, both old and new. Traditionally, African development has been influenced by donor nations in Europe and the USA. More recently, the emerging economies of India and China have become factors of influence as well. Chinese investments in Ghana, for instance, have long exceeded those of Great Britain. China is pushing its way into the West African state with all its might. 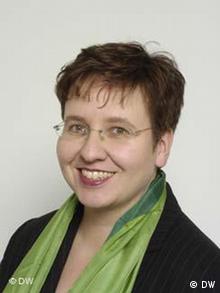 Globalization and rapid growth of the emerging economies have outrun the classical, European type of development policy. Africa is now part of a new international architecture.

Ghanaians living abroad transfer up to 4 billion euros ($5.2 billion) to their homeland every year, making a significant contribution to its economic growth. In Ghana, like in other parts of Africa, doors remain wide open for China and India.

Europe has so far missed on this development and that's what the German president is concerned about. The old development recipes are no longer effective. Europe's outdated Africa policy, in which everybody takes care of their own, personal Africa, should be dead and buried. How long does Europe think it can keep its markets protected from African products? How long can Europe keep believing that it can prevent migration from the neighboring continent using high walls, border controls or reception camps in the north African desert?

The European policy toward Africa, which is shaped by fear and protectionism, is limiting Africa's potential that others have long noticed and taken advantage of. Europe should become more aware of its own interests in Africa, including, for example, the issue of energy. At the moment, Africa produces 12 percent of the world's crude oil supplies. By 2010, that amount will double. The continent has over 50 million tons of natural gas at its disposal, which is one third of the deposits in the world.

Africa's unused potentials include its manpower. Europe needs immigrants as well temporary foreign workers. Migrations -- from Africa and elsewhere -- must be legalized and Africans, too, must be allowed temporary entry to Europe. Not the least because Africa is a growing market that countries like China and India have long noticed and started exploiting. Africa is developing quickly. Ghana is a case in point.

Europe should not hand its neighbor continent over to China. It is important to establish wide-ranging connections, social contacts and networks to get to know each other so that everybody can recognize their common interest. The German president knows this, which is why he has launched his Africa initiative. With his continuing engagement and his third trip to Africa, he wants to make sure that Africa remains on the German government's agenda.

Germany could set certain things in motion for Africa, both in the EU and at the G8 summit. This could happen in theory at least, since other topics -- the constitutional process or relations to Central Asia -- are seen as the more urgent priorities of the German EU presidency. The German government, however, is planning to address the issues of African economic conditions and development at the G8 level. Is that the first sign that the old Europe is waking up and beginning to see its own chances in Africa? Perhaps, though not definitely.

With Germany now president of the European Union, the city of Dresden hosts the first informal meeting of EU interior and justice ministers of the new presidency Monday. Illegal migration is high on the agenda. (15.01.2007)

Europe Critical of US Airstrikes in Somalia

European criticism of US military intervention in Somalia mounted on Wednesday amid reports of fresh American air strikes in the southern part of the country aimed at hunting down al Qaeda suspects. (10.01.2007)