Germany's government has belatedly acknowledged that the century-old killing of Herero and Nama in southwest Africa was genocide. Now the only thing missing is an apology, DW's Claus Stäcker writes. 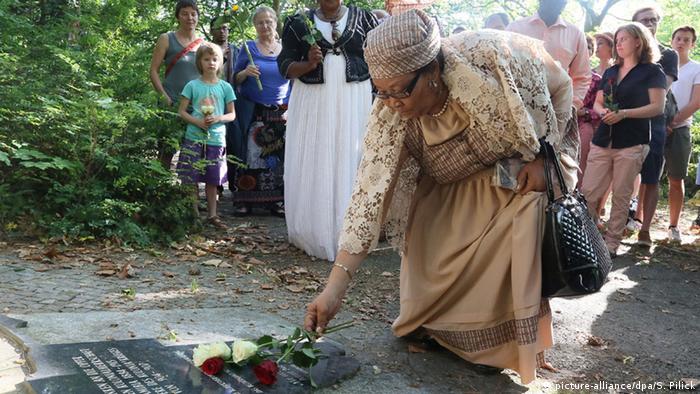 Genocide is genocide is genocide. When it came to the 1915 Ottoman massacre of Armenians, German parliamentarians had a much easier time with the term. There was a large majority and general unanimity in the condemnation of the Ottoman Empire. Perhaps it was because they were only dealing with Turkey and its national founding myth. Turkish President Erdogan hit back: Germany is the last country that should pass judgment about whether the Ottomans committed genocide. It should first account for the more than 100,000 dead Herero in southwest Africa, he snorted.

Erdogan was right. The fact that there has never been an unequivocal explanation is "a little embarrassing," said Norbert Lammert, the Christian Democrat president of the Bundestag.

Momentum toward acknowledging that the mass killings were genocide began building a while ago, when the decadeslong legal argument that the term only applied after the 1951 UN Convention on the Prevention and Punishment of the Crime of Genocide went into effect was struck from official government rhetoric.

At a 2004 commemoration ceremony at Waterberg, Social Democratic (SPD) Development Minister Heidemarie Wieczorek-Zeul said the killing of Herero and Nama peoples could be seen as genocide "according to our understanding of the term today." She even delivered an apology in the name of the German government - if in a somewhat hedged fashion: She asked descendants for forgiveness, forgiveness in the sense of the Lord's Prayer. The statement got her in trouble with Foreign Minister Joschka Fischer, of the Greens, who was concerned that the utterance could be "compensation-relevant."

Times and regimes have changed. What was an unsuccessful proposal put forth by the SPD's Frank-Walter Steinmeier as a member of the opposition in 2012, is now, under Foreign Minister Steinmeier, an official guideline: "The war of annihilation in Namibia between 1904 and 1908 was a war crime and genocide." This sentence has become government policy and is also the basis for ongoing reconciliation and compensation talks with Namibia's government. Just a few days ago, special envoy Ruprecht Polenz and Africa representative Georg Schmidt once again sat down with officials in Windhoek, the capital of Namibia.

The experienced politicians are neither revisionists nor hard-liners. They are seeking an agreement that does not dwell on the past but anticipates the future. That's an attitude shared in Namibia.

The negotiations are to be completed by the end of the year. The Bundestag and government are expected to deliver a final statement on the genocide question sometime in before the 2017 general election. It is to be the official apology that the descendants of slaughtered Herero and Nama have been waiting for in vain for so long.

Historians will battle over whether the Ottoman cleansing of Armenians or Germany's campaign of destruction in southwest Africa was the first genocide of the 20th century. Many sources in Namibia have yet to be thoroughly studied. Thus there is a hotly contested fight among academics as to just how many people were actually killed, how, and according to which military and political orders. In the end, it could be that there were far fewer than 100,000 people killed. Some argue that imperial colonial troops were far too poorly equipped and unmotivated to commit an African holocaust. And it could also well be that the "great general of the powerful German emperor," as the initiator of the extermination order, General Lothar von Trotha, described himself, acted without having received instructions from the emperor or the chancellor telling him to commit genocide.

The historians' quibbles do not do justice to the victims and rarely take into account the oral history of the Herero and the Nama. The crimes committed are broadly documented and have yet to be atoned for. The calculation that all German governments have followed to date, that of giving generous development aid in order to make today's Namibians forget that past, has not worked. Officials have continually shirked the issue or delegated it to the lowest levels of government: In 2011, defensive political tactics turned the highly emotional return of Herero skulls from Germany's former race research institutes into a disgraceful fiasco.

One hopes that that's all over - even if the issue will never completely be put to rest. Now the question of who will be compensated and how is on the agenda. No matter how much goodwill there may be, it remains a complicated issue. In this instance there are no remaining survivors as there were after Germany's next genocide, the Holocaust, in 1945. The multiethnic state of Namibia is also not interested in creating competition between ethnic groups by asking for individual reparations. Herero activists have complained that they are not being heard and are threatening to take the issue to the Permanent Court of Arbitration in The Hague. The issue continues to seethe, despite the fact that Namibian and German negotiators in Windhoek repeatedly say talks have been constructive and in no way inimical.

There is a debt to be paid. And Germany must finally put forth an apology - one that is official, dignified and believable. The sooner, the better.