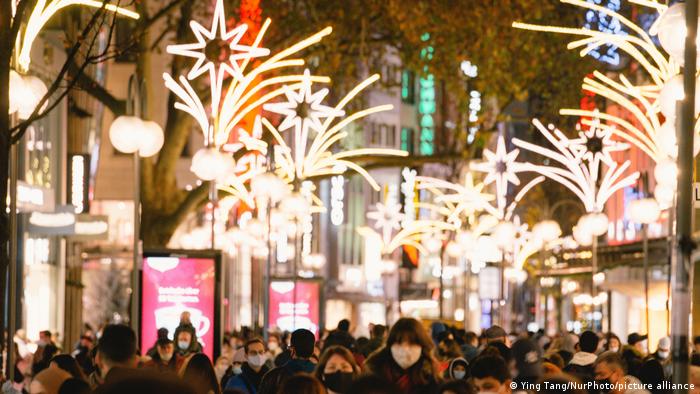 Is anyone really still surprised that Germany's coronavirus restrictions, originally planned to end in November, were extended and even tightened? Recent surveys show that the decision made by Chancellor Angela Merkel and state leaders did not shock many people in Germany. In fact, most said they believe it was right to put stricter rules on contact with other people. That's good news for the government.

Despite all the psychological strain caused by the pandemic and the tug-of-war between state leaders and the chancellor, most people — though not as many as at the beginning of the outbreak — agree with the general line taken by Berlin in the fight against the spread of the coronavirus.

Political leaders wanted to send a clear message: We're saving Christmas and a little bit of New Year's Eve because we understand how important these celebrations are, and that's why we're relaxing the restrictions from Christmas Eve until just into the new year.

That Angela Merkel sees this as a high-risk decision is easy to notice, but over the last few months, she's come to see that she does not have enough influence to force greater sacrifice on people in Germany.

Germany's health care system up to the challenge

Merkel has emphasized that a look at Germany's neighbors shows that the country has managed to cope well with the pandemic. In other nations, there were — and are — lockdowns that Germany has avoided, with the exception of a few hotspots. Not to mention that people in Germany have also been spared the images of long lines of vehicles transporting bodies from hospitals seen in Italy.

But the situation in Germany is serious enough. On the very day that state leaders met with Merkel to discuss additional restrictions, the country's public health authority announced Germany's highest coronavirus death count.

Are we willing to turn a Christmas celebration into a superspreader event? How will Germans residents react in February when it's time to pack for the traditional ski vacation? The partial lockdown that began in November has led to new infections growing a bit slower than before, but that's far from a reversal of the trend or a decline in new infections. Merkel would have had to deny all the steps taken over the last few months if she did not insist on additional restrictions.

But being told to look at the sometimes dire situation outside of Germany does not help people cope with the crises they still face here. The virus strikes a society with a declining sense of community and family. A society where the number of one-person households keeps increasing. And we won't know what effects this has on people until the pandemic has passed and we can soberly look back on the month we spent socially distancing.

Coronavirus fatigue has set in. Merkel is reported to have said people wanted "this thing" finally to be over — and she's right. That means every measure, every new restriction needs to be well-founded, and that's happened less often lately than it did in the spring.

The main reason for that is because Merkel is not responsible for putting the restrictions into place. That's the job of the states and municipalities. She's also already decided not to run for reelection, leaving her free to do and push for what she really believes is right. Her intention is clearly to step down as chancellor knowing that her work spared Germany the worst effects of the pandemic.

On the other hand, state premiers have to present the new demands to the public and yes, these politicians also want to get reelected. In this kind of charged environment that ideas emerge like Merkel's proposal to limit children to meeting just one other friend. State leaders were right to swat away that unrealistic suggestion. As an example of just how aggravated the proposal got people in the country, Germany's largest newspaper, Bild, spent days tearing apart the "one-friend plan."

But the majority of people in Germany will go along with the newest restrictions. Most people already came to terms with their favorite bars reopening next year — if they reopen at all. It's true, this stupid virus is not going to just disappear. All that's left is to hold on until a vaccine is ready and — somehow — find a way to hold it together. Happy holidays, I guess.

This article has been translated from German (sms).