Two stubborn forces are squaring off in Spain and Catalonia. The EU should attempt to mediate the independence dispute, even though the legal situation seems crystal clear, says DW's Bernd Riegert. 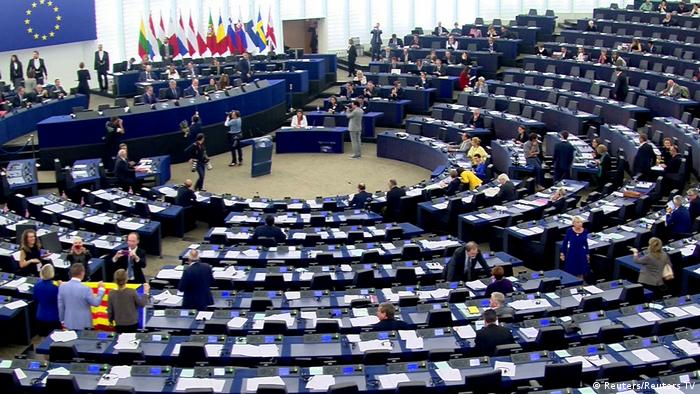 Is it really possible that a conflict brought on by an independence movement might actually lead to a governmental crisis, an attempted coup or even a violent confrontation within the European Union in the 21st century? Who is willing and able to step in and put an end to the madness taking place in Catalonia? So far, the Spanish government has failed miserably. Right now, those Catalans who want independence, alongside the region's state government, are simply pushing ahead with their plan. The Spanish king has intervened but the conflict still continues to intensify. A unilateral declaration of Catalan independence is only days away. Is that legal? Illegal? The Catalan president could care less.

EU restraint is therefore understandable from a legal standpoint, but is it politically wise? No, it isn't. The European Commission, or European Council President Donald Tusk, should not simply stand by as the situation in Catalonia continues to escalate. It would be helpful if someone within the EU would offer to facilitate dialogue between Madrid and Barcelona. That said, there is no chance that the EU can take on the role of a true mediator because neither Madrid nor Barcelona want that. Catalan representatives in the European Parliament expect the EU to discipline Spain. That won't happen. For their part, diplomats representing the Spanish government in Strasbourg have rejected the idea of mediation or even dialogue with the Catalan president. The Spanish government says that Catalonia is carrying out a coup. Thus, there is nothing to discuss.

Nevertheless, the EU should at least offer its services in laying the groundwork for talks. The bloc must show its citizens that it is dealing with the situation and doesn't simply ignore crises. EU Vice-President Frans Timmermans, who is responsible for the rule of law within the bloc, has signaled that he is keeping a close eye on the legality of the situation in Spain. But he sees the approach of Catalan separatists as the root of the problem. Still, if the EU continually points to itself as a successful model for peace it must prove that it is also capable of finding peaceful solutions to conflicts within individual members states and not just between them.

The European Commission urgently needs to come up with a backup plan in the event that Catalonia actually takes the irrational step of unilaterally declaring its independence from Spain. Neither the EU nor any of its member states would recognize such a move. But that would still leave the problem of just how to deal with Catalan representatives, travelers, goods and any future attempts at accession. What will the EU do if Spain decides to remove the regional government, call new elections and revoke Catalonia's autonomous status? All moves, by the way, that are within its legal rights. So far, the EU has been content to bury its head in the sand rather than deal with this crisis – which has been building for years. That is no longer an option.

One major reason that it is no longer an option is the fact that Brexit supporters, right-wing populists and nationalists across the EU are trying to mythologize the situation in Catalonia as just one more instance in which Brussels is trying to crush minorities' and peoples' freedom. Of course that argument is utter nonsense; nonetheless, it is not enough to ignore it. Such arguments must be convincingly refuted. Otherwise, the Spanish crisis could well become a European crisis.