Opinion: Days of turmoil in France

Nuclear power plant workers have joined nationwide labor protests. France is in for a hot summer: The Euro 2016 holds potential for chaos while the government has reached the end of its rope, says DW's Barbara Wesel. 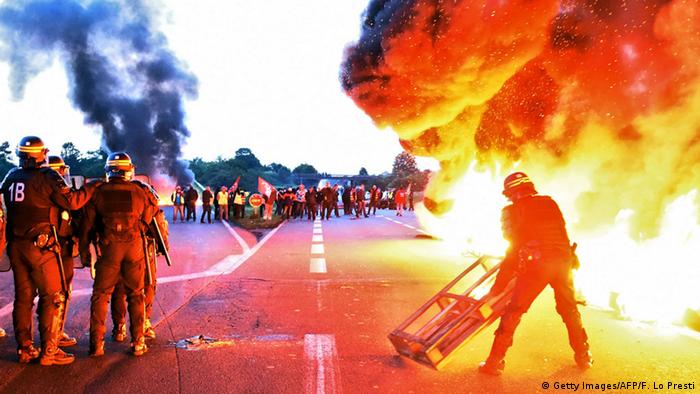 German leftists in the late 1960s and early 1970s believed in a chaos theory that postulates that a state must gradually be destabilized until it collapses. After that, a brave, new socialist world can emerge from the ruins of the old one. It seems that the General Confederation of Labor (CGT) in France has not developed this doctrine since then. CGT has paralyzed refineries, parts of the public transport system and has extended its activities to include nuclear power plants, which supply most of France's electricity. In a nutshell: France is in for a hot summer.

The nation is vulnerable

CGT hardliners know how much power they have in France these days. The Euro 2016 begins in two weeks and the potential threat of Islamist attacks in stadiums cannot be ignored, even with the most extensive security measures. Thus, the strikes that have brought public infrastructures to a halt are a double whammy: Soccer fans will have a hard time reaching the stadiums for matches, or they may just prefer to stay home when faced with the prospect of chaotic conditions in the host country. And the police have split their forces to protect Euro 2016 venues and to battle the trade unions that have impaired oil refinery and nuclear power plant operations.

Thus, CGT has achieved a series of "victories" in one move: Once again, France is ungovernable and international investors are fleeing. The weak and unpopular Hollande government must fight to survive, and even that does not seem certain until the next elections. At the same time, the union is destroying the economic recovery that President Hollande had recently placed his hopes on.

According to the premise of class struggle, this is all logical. And with regard to the chaos theory, the result means that France has been brought to its knees and the road is clear for the construction of a working class never-never land.

It is not about reforms

This is actually not about labor market reforms. The legislative changes have been watered down and they merely make it possible to dismiss a worker or occasionally make people work more than 35 hours a week. Is that why the French welfare state is at stake? That is what the bullheaded, irresponsible leftists tell their followers.

The small reforms have indeed come much too late. Small and medium sized companies in France have given up because they cannot afford to hire workers. Entire regions are financially drained, as small businesses, shops and restaurants close because their revenues cannot cover the cost of hiring employees, social contributions, taxes and expensive bureaucracy.

The new legislation that is dividing France is not a surrender to global financial capitalism. At best, it is taking a small step closer to common sense, economically. A new survey shows that the roughly six-hour work days in the Paris region are among the lowest in Europe. But unions feel that neoliberal traitors are the ones questioning the system.

A power struggle is behind the strike

As usual, this is not about the matter at hand, but instead, about power struggles. The erstwhile communist CGT is struggling to stay at the top of the French union heap and its traditional power to paralyze the nation at will, as in the German workers' song, "All wheels stand still," and so on. Yet the CGT only represents a tiny fraction of French employees. However, it does have many sympathizers and that is what makes the situation so highly charged.

President Hollande cannot bow to the pressure because it is his last chance to somehow hold his head high when he leaves office next year. He spent a long time helping solidify the impasse in France. Now, he is acting with the courage of someone who is desperate.

Do unions help the right-wing populists?

The winner of these visionless, ideological displays of strength will probably be the right-wing populists, National Front. The socialists, with the left wing of the party, are about to self-destruct. The conservatives have been weakened by scandals for years and do not offer French protest voters an alternative. Marine LePen is probably rubbing her hands with glee: She is promising the French people law and order in the country, and also, a nationalist worker's paradise. It is, of course, nonsense, but it just may win her the election.

As a result, the fragmented socialists and conservatives who are no longer capable of renewal have contributed to the rise of the right-wing populists. It is a déjà vu of the worst kind: The French may come to their senses, if they look back at the history of the Weimar Republic.

Violent clashes break out in France over labor reforms

Riot police have used tear gas to disperse protesters in the French capital during demonstrations against labor reforms. The prime minister has said he's open to 'improvements' to the bill but won't scrap it altogether. (26.05.2016)

France’s economy is recovering at a pace insufficient to combat high unemployment - and the government may need to extend its already unpopular labor reforms, the International Monetary Fund (IMF) has warned. (24.05.2016)