Opinion: China needs more authenticity to successfully woo the world | Asia| An in-depth look at news from across the continent | DW | 30.09.2009

China has spent the last 30 years adapting Western technology and management methods. Now, it wants to increase its soft power, but as the recent row over the Frankfurt book fair shows, that is easier said than done. 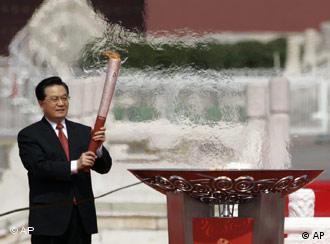 In an unparalleled race to catch up, Beijing became the world's workbench and then developed into an economic and political heavyweight. This economic success is now being accompanied by the worldwide wooing for the hearts and minds of the west.

No matter if it's the Olympic Games in Beijing in 2008 or the world fair Expo in Shanghai next year, China avoids no opportunity to present itself before a world audience - no matter what the cost.

These top happenings are just the tip of the iceberg, though. Beijing doesn't just want to conquer the supermarket shelves of the world, but also the minds of the population.

China's propaganda chief Li Changchun admitted it openly during the 50-year celebrations of Chinese state broadcaster CCTV at the beginning of the year. The nation with the strongest communication capabilities could disseminate its culture and central values and therefore influence the world, Li said.

Economically, China has caught up to the West tremendously. But its cultural appeal is lagging far behind. Even the Olympic Games couldn't reverse the trend. The unrest in Tibet and the protests during the torch relay, the ongoing discussion on human rights, as well as the scandal about contaminated milk powder shot down the hoped for image gain. Beijing is trying to counteract - with a lot of money and on all levels.

The Chinese government wants to invest some five billions euros ($7.3 billion) in expanding their foreign media by 2011. The lion's share is earmarked to the development of an international English-language television station under the control of the news agency Xinhua. 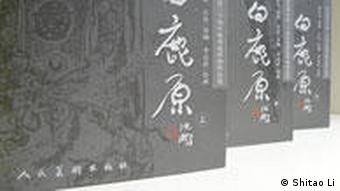 The daily English language paper Global Times has already been on the market since April. The publishers are expecting a loss of some two million euros in the first year.

And Beijing has already for years been investing massively in developing Chinese cultural institutes. The first Confucius Institute was founded in Seoul in 2004. In the meantime, there are over 300 worldwide. In Germany alone, there are already eight; three more are currently being planned.

Anja Warnecke-Bi, the director of the Confucius Institute in Frankfurt, said she can only speculate on why the Chinese government is investing in these institutes to such an extent.

"I am certain that it has to do with the fact that the Chinese government or rather Chinese business is taking on an ever-larger role in the world," Warnecke-Bi said. "The government, of course, wants to contribute, so that the rest of the world doesn't regard China as a threat."

She said the Chinese government hoped that by investing in the Confucius Institutes, people in those countries get to know China and Chinese culture better and can therefore judge it accordingly.

"Because fear often results from the unknown and they want to take away this unknown," Warnecke-Bi said.

The search for harmony

Since April 2008, language courses are the core of the work at the Frankfurt Confucius Institute. Worldwide, some 30 million people are learning Chinese. Over 100,000 foreign students travel every year to China to study the language.

In New York, affluent families are hiring Chinese nannies. Their offspring are supposed to playfully learn the language their parents consider the language of the future. 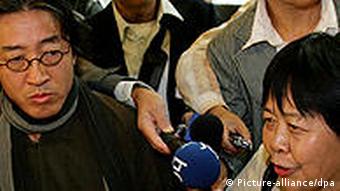 Chinese dissidents Bei Ling and Dai Qing came to the symposium, though they had been uninvited

The soft power strategists in Beijing should be happy about the worldwide growing demand for Chinese. But on the cultural side, it's not so clear.

China has just experienced this in the run-up to the Frankfurt Book Fair, being held in mid-October. China is the guest country of honor this year. A joint symposium held just four weeks before the fair begins provoked international furor due to an uproar about the appearance of two dissidents - precisely the attention Beijing doesn't want.

According to the Bonn-based sinologist Thomas Zimmer, China mainly wants one thing: to look good.

"It doesn't want to present itself as a country, as a culture in which problems and conflicts surface," Zimmer said. For several years, China had been talking about a "harmonious society" - an ideal it is trying to achieve.

"But, of course, it basically only covers up many problems that exist in the background," Zimmer said.

China wants to present itself as a modern, open-minded country. But at the same time, it sidesteps confrontation with critics and ironically likes to rely on the tried and true past, in which great art, poetry and philosophy existed.

"They're acting out of insecurity because they don't want to outwardly show that they are a country still developing and searching for a preferably new cultural identity," Zimmer said. "This gives these appearances on an international level, especially when they deal with culture, something enormously stiff and fake from our perspective."

Above all, China has to learn one thing in its endeavor for soft power: authenticity. And that can't be bought, no matter how much money one has. It can only be achieved through the open handling of criticism and unadorned truth.

China increases its economic and political footprint in Latin America

During their summit, leaders of the Mercosur trade bloc will debate whether to ditch the US dollar as their reference currency. While the US is loosing influence in the region, China is rapidly gaining ground. (24.07.2009)