Opinion: By throwing flares, Mainz ultras damaged their own cause

German fans are frequently demonized for their use of pyrotechnics, which many would like to see legalized. But by throwing flares onto the pitch, Mainz ultras did fans everywhere a disservice, writes DW's Matt Ford. 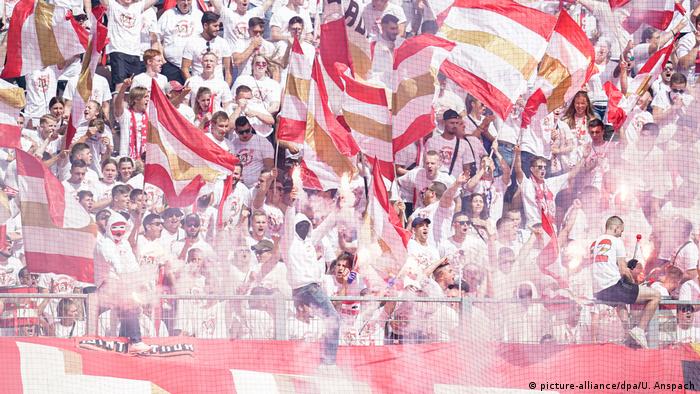 It was a derby day to forget for Bundesliga side Mainz 05.

Not only had they been knocked out of the German Cup in the first round by lower-league opposition, but that opposition happened to be local rivals Kaiserslautern, the German champions of 1997 now languishing in the third division. But as if a 2-0 defeat in the first Rhineland Palatinate derby since 2012 wasn't enough, things went wrong off the pitch for Mainz as well.

The traveling supporters, gathered behind a huge red banner proclaiming "Q Block Power" — the initial of their block at home games — had impressed throughout with their matching white T-shirts, constant chanting, flares and smoke bombs.

But when Kaiserslautern captain Florian Pick made it 2-0 to the hosts in injury time, the celebration in the away end turned to frustration and a dozen flares flew onto the pitch. One fell short, setting the "Q Block Power" banner on fire and prompting firefighters to intervene.

It was a bad end to a bad day for Mainz — but also for other football supporters across Germany whose efforts to legalize the use of pyrotechnics in German stadiums have suffered another setback.

Pyrotechnic devices — flares, smoke bombs, strobes and other fireworks — are considered by many to be an integral part of football culture in Germany, a colorful and vibrant expression of emotion and passion.

Images of smoke-filled terraces, huge homemade flags swirling dramatically in the glow of red flares, quickly go around the world, interpreted as evidence of a more authentic, less gentrified football culture in which social boundaries are allowed to be pushed.

Unfortunately for German fans, and the hardcore ultras in particular, such devices are banned in German stadiums — albeit, contrary to popular belief, not strictly-speaking illegal. Their use frequently results in hefty fines for the clubs involved: €1,000 per device in the Bundesliga, €600 in the second division and €350 in the third.

Last season, clubs in Germany's top three divisions were fined a total of €3,397,950 ($3,843,594) for the behavior of their supporters — but the use of pyrotechnics shows no sign of stopping. On the contrary, the punishments only seem to make fans more determined to express their emotions in ever more creative and explosive ways, including an ongoing campaign to "legalize pyrotechnics."

For advocates of pyrotechnics, controlled pyro is safer pyro.

But even the ultras have their limits. The majority of groups in Germany avoid the use of so-called "Böller" — dangerously loud bangers which detonate with little or no visual or audible warning. Similarly, most groups also strictly refrain from throwing flares, behavior which is considered taboo.

Which is why the decision of Mainz ultras to throw flares onto the pitch in Kaiserslautern was particularly unhelpful. Not only is it dangerous to throw a device which burns at between 1,600 and 2,500 degrees Celsius; such behavior brings with even heftier fines for the clubs involved, up to €3,000 per device in the Bundesliga.

But most importantly, every single flare thrown deals a huge blow to those fans campaigning for the legalization of pyrotechnics, and provides free ammunition for those who would wish to criminalize football supporters even further.

It really was a derby day to forget for Mainz fans. And for fans elsewhere, too.

Bayern Munich are the bookies' favorites to win an eighth consecutive Bundesliga title. But contradictory comments from figures within the club regarding Leroy Sane suggest all is not well in the Bavarian capital. (01.08.2019)