Borussia Dortmund secured Champions League qualification with a 3-1 win over Mainz on Sunday. Edin Terzic and his men have turned it around, but DW's Matt Pearson believes that the ripple effect of one call was decisive. Borussia Dortmund qualified for the Champions League on Sunday

The resurgence of Marco Reus, the prodigious performances of Erling Haaland and Jadon Sancho, the galvanizing effect of Lukasz Piszczek and Edin Terzic.

There are a number of factors that have helped Borussia Dortmund turn a season that looked like a catastrophe into one that has probably exceeded expectations.

Six impressive league wins in a row have seen the club qualify for the Champions League after winning the German Cup in midweek. But their achievement owes as much to the fallout from their future coaching appointment as their on-pitch improvement. 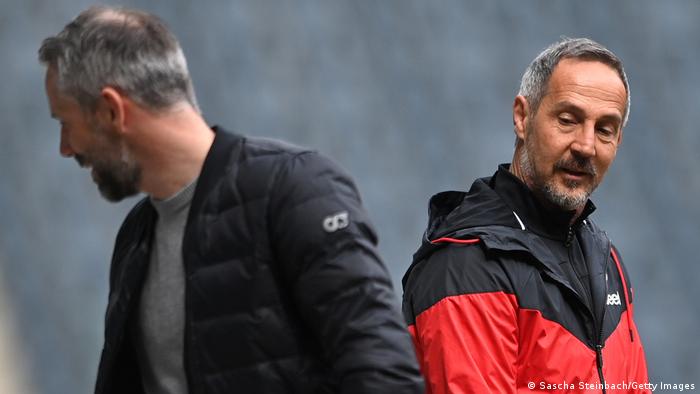 After sacking Lucien Favre, Dortmund announced in February that Marco Rose would join them from Borussia Mönchengladbach at the end of the season. At that point, the two teams were level on points and battling to get in to the Champions League spots. Gladbach then lost seven in a row, crashing out of contention for qualification, the German Cup and the Champions League.

Still Dortmund struggled to get it together while Wolfsburg and Frankfurt continued to impress. A 2-1 win for Eintracht over Dortmund looked to have ended Dortmund's challenge only for Adi Hütter to announce he'd take Rose's job a few days later. Four points from five, including a loss to Schalke, and a slide down the table followed.

Coincidence? Possibly. But it's more likely this is the product of coaching release clauses being activated mid-season.

Given that few coaches are likely to move to a side lower down the league with less resources, such an arrangement inevitably gives a further advantage to teams who already enjoy a strong hand.

Though it is doubtful that Dortmund bought Rose because they wanted to unsettle a rival, that was the effect. In turn, it created a similar problem at Frankfurt. Further up the table, Bayern Munich's hiring of Julian Nagelsmann has hardly helped RB Leipzig. Though no exit clause was involved there, that one did Dortmund no harm either.

Bo Svensson, whose impact at Mainz has been exceptional, said it clearly enough when explaining why he rejected such a clause. "For me, it would be strange if I say I'll sign with Mainz because we want to build something together and at the same time add an exit clause that says 'if the situation improves quickly in 12 months, I already want to get out.'"

Of course, it's possible that Frankfurt and Gladbach would have regressed and, sooner or later, a club with the talent Dortmund possess will get their act together. But do players really want to give their all for a man who sees his future elsewhere? Why should they show any loyalty to anyone but themselves in such a situation?

If a club wants a coach under contract somewhere else, they should have to agree a fee in the way Bayern did with Leipzig. And the coach should have the courage to leave immediately or reject the deal until the time is right. The current situation has unwittingly benefitted Dortmund this season and will continue, inevitably, to favor the big clubs.

And, if we've learned anything in recent weeks, it's that few of us want that.