Opinion: Bellingham and Reus can complain all they want, but Borussia Dortmund shot themselves in the foot | Sports | German football and major international sports news | DW | 04.12.2021

Opinion: Bellingham and Reus can complain all they want, but Borussia Dortmund shot themselves in the foot

Borussia Dortmund were furious at referee Felix Zwayer after their defeat to Bayern Munich. Justifiably so, says Matt Ford, but they ultimately need to look closer to home. They only have their own mistakes to blame. 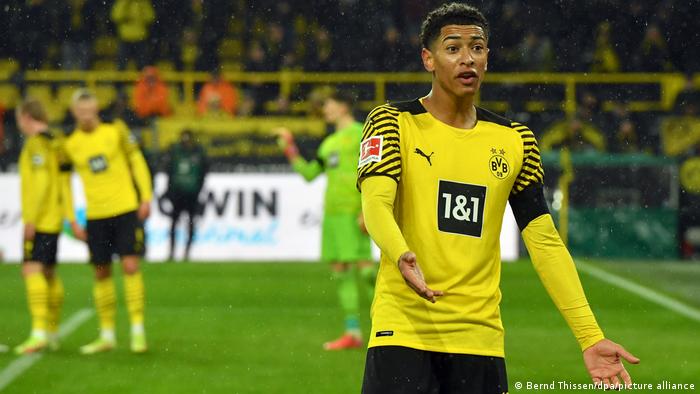 "What do you expect?" Jude Bellingham was furious at the referee

"If you give a referee who's match-fixed before the biggest game in Germany, what do you expect?"

Jude Bellingham made no secret of who he held chiefly responsible for Borussia Dortmund's defeat to Bayern Munich on Saturday evening.

Teammate Emre Can didn't hide his anger either: "I think it's a pity that such a s*** penalty decided the game again. It happens too often in favor of Bayern. What do we have the video referee for?"

Referee Felix Zwayer, who was famously embroiled in a match-fixing scandal back in 2005, had awarded Bayern a controversial late penalty, with the help of the video assistant, after adjudging Mats Hummels' handball in the box to have been deliberate.

Earlier in the second half, however, with the score at 2-2, he had failed to even take a second look at a foul by Bayern's Lucas Hernandez on Marco Reus.

"Oh God, he absolutely has to look at that," the Dortmund captain fumed when shown the scene postgame. "Two decisive decisions which he could easily have given in our favor."

In hindsight, Dortmund would most likely not have been awarded a penalty anyway due to a marginal offside in the buildup. But Reus' and Bellingham's anger was still justified; they were controversial decisions which fundamentally changed a game in which Dortmund were very much on a par with Bayern. But the referee wasn't the only thing which tipped the tie in Bayern's favor.

BVB only have themselves to blame

This was a wild, chaotic Klassiker made exciting not only by moments of individual class – such as Bellingham's cross to Julian Brandt for the opening goal or Erling Haaland's curled finish – but mainly by mistakes.

Especially from Borussia Dortmund, and especially from Hummels, who cut a tragic figure in all three Bayern goals. Before his late handball, he had already lost possession ahead of Bayern's first goal and had a clearance fired straight at him as the slapstick reached new heights for Bayern's second.

And it wasn't just Hummels; Dortmund collectively failed to capitalize on the space that Bayern's makeshift midfield afforded them, or the clear physical advantage that Haaland enjoyed over the vulnerable Dayot Upamecano.

Coach Marco Rose also needs to take a look at his own performance. His gamble on the fitness of Haaland and Bellingham seemed to pay off early on, but the English midfielder in particular faded as the game went on.

By that point, Rose himself was no longer on the touchline, having been sent to the stands for remonstrating with Zwayer. After his yellow card for a similar indiscretion in Lisbon two weeks ago, it was another indication that the 45-year-old doesn't always have his emotions under control. 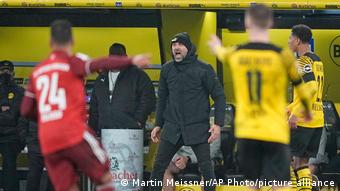 But he, Reus, Can and Rose will all know that their frustration stems from a problem closer to home: Borussia Dortmund shot themselves in the foot, and are now four points adrift.