Opinion: Apple, taxes, and just punishment | Europe| News and current affairs from around the continent | DW | 30.08.2016 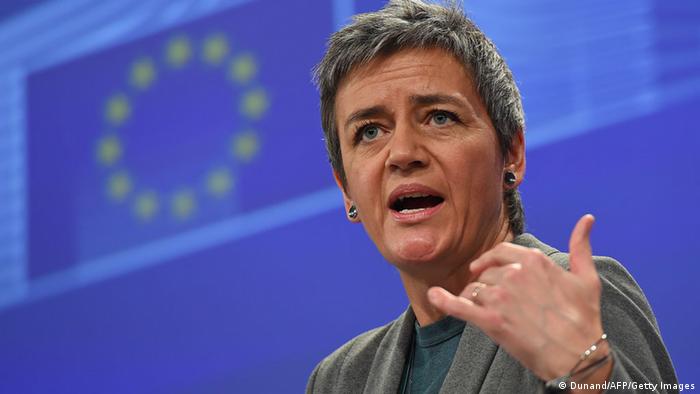 EU Commissioner for Competition Margrethe Vestager: not afraid of the big guys in business

Margrethe Vestager reminds us of the purpose of the European Union. Only she - as European Commissioner for Competition - can act against tax-avoidance schemes employed by individual member states looking to cozy up with multinational companies. Ireland's tax favors for the computer giant, Apple, may not have broken its own country's laws, but they do violate European competition regulations. Without the EU, Ireland, the Netherlands, Luxembourg and other countries could continue to shamelessly offer advantages to particular companies over others with unfair tax policy. A common, single market is the only bulwark against tax fraud.

It's a positive development that the European Commission is now firmly standing up to tax schemers, regardless of criticism from Ireland or the United States, which seeks to protect American business interests. Amid refugee and Brexit drama, the EU is demonstrating to upstanding taxpayers and average businesses that it stands for law and reason.

Legal action against Ireland, Luxembourg, the Netherlands and four other member states comes a little late. Tax-saving schemes, often dubbed "double Irish" or "Dutch sandwich," have already been in place for 30 years. The European Commission only woke up two years ago, when Luxembourg's massive tax advantages were revealed. Its preliminary investigation extends to all 28 EU states – that's how far-reaching suspected tax avoidance goes. More than 300 companies are expected to be affected in Luxembourg alone.

Apple in Ireland is the fourth large company required to pay back tax, following Starbucks in the Netherlands, and Amazon and Fiat in Luxembourg. Caught red-handed, Ireland and Apple are seeking to reverse the 13-billion-euro ($15 billion) back payment ordered by the European Court of Justice, but they stand little chance before the court. Contrary to the Irish finance minister's claim, the decision will have no effect on the fiscal sovereignty of member states.

Ireland doesn't want the $15 billion back, which it could have put to good use during the financial crisis. It almost went bankrupt at the time and had no qualms in receiving nearly $80 billion in EU bailout money. A country that artificially lowers its tax revenue should have no claim to easy financial rescue.

Ireland should not have been able to cut its 12.5 percent tax rate to just .005 percent, least of all just for Apple. That is the unfairness the European Commission is now calling out.

Slowly, and following hard negotiations, finance ministers are turning the page. They want their tax authorities to be able to automatically exchange information with each other about tax schemes. This will allow member states to keep an eye on each other, however the information will be withheld from the public.

Over the long term, the single European market needs to develop a single tax system that sets the same conditions for people and companies. This, however, is something member states are far from creating; instead they sometimes use their tax rates to compete with one another. In the meantime, finance ministers want to at least form a common basis for corporate taxation, including a minimum corporate tax rate.

It's a slow process, but there would be no progress at all without the EU. That's all the more reason why we need it.