Opinion: Annan Justified in Criticism of Media | Europe| News and current affairs from around the continent | DW | 10.02.2006

UN Secretary General Kofi Annan spoke out about the ongoing Mohammed cartoons controversy, saying the media should not pour oil on the fire by reprinting the images. His words were justified, says DW's Peter Philipp. 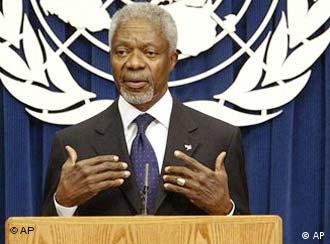 Kofi Annan deserves credit for his emphatic appeal to all sides in the cartoon controversy to come to their senses and to deescalate the situation rather than continue the cycle of denigration and violence.

Level-headed sentiments such as Annan's have become all too rare in a time when, in the throes of moral outrage -- or what is taken to be moral outrage -- people are being mobilized in what's billed as the "Clash of Cultures." The violence spawned by the cartoons has already claimed its first victims, and in the West, resulted in the erection of any number of barricades for the supposed protection of freedom of expression and freedom of the press.

Annan didn't even say anything all that sensational -- he simply stated the obvious, which is that there can be no understanding for European media that reprint the cartoons and thus pour oil on the fire. Freedom of the press does not grant the media carte blanche, rather it should be used with a sense of responsibility and judgment. At the same time, though, violence is not an acceptable answer, especially when it's directed at innocent people who had nothing to do with the publication of the cartoons.

To prevent such things from happening in the future, it's absolutely necessary to review the question of human rights, and to clarify what priority should be accorded to press freedom on the one hand, and religious freedom on the other. 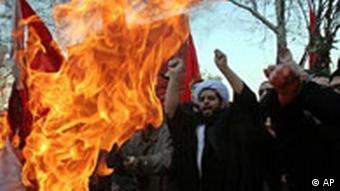 Still, conventions and laws alone won't be enough to stop such incidents from repeating themselves. That requires a little bit of common sense, and a lot of humanity. These qualities could have prevented the initial publishing of the cartoons in Denmark, and on the Muslim side, they also should have lead to the incident being dismissed as the tactless lapse of a newspaper, and not the signal to wage a war of civilizations.

Annan was right to criticize the further publication of the cartoons in other newspapers. The decision to do so could be defended by arguing that it's necessary to show readers what the fight is all about. Instead, most media have held up their publication of the cartoons as a way of defending the freedom of the press -- even though by now, every idiot should know how explosive this is.

Admittedly, it seems a bit odd when all the TV talk shows limit themselves to describing the caricatures in words. But by now, anyone who's truly interested in the debate is aware of what it's about or has found the cartoons on the Internet or elsewhere.

Anyone who would now persist in publishing the controversial cartoons must also be willing to stand accused of wanton arson. Kofi Annan could not have been more to the point in his condemnation of such action.

Read DW-WORLD's dossier of stories about the cartoon controversy.