Opinion: A thin line for US Democrats | World| Breaking news and perspectives from around the globe | DW | 03.03.2017 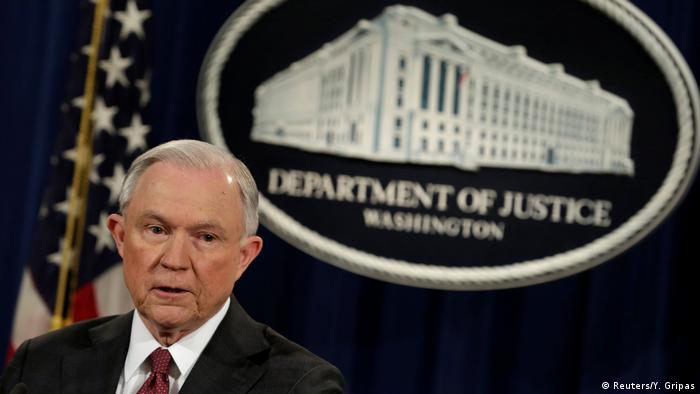 Russia is somehow bringing US President Donald Trump no luck at all. He lost his first National Security Advisor because Michael Flynn tried to keep secret talks he had with the Russian Ambassador. The same allegations have been leveled by the Democrats and left leaning media at Attorney General Jeff Sessions - and they are calling for his resignation.

That seems unlikely: the attorney general has the full support of the president. As long as this remains the case and the Congress doesn't launch impeachment proceedings, Sessions sits firmly in the saddle. But the whole discussion about Russia's influence on the US elections harms the Republicans.

It insinuates that Trump has for a long time held secret contacts with the Kremlin and that he used Putin's help to win the presidential elections. The suspicion that Russia could have influenced the US elections gives the victory of the Republicans a bitter after taste. No wonder that the opposition Democrats are keeping the discussion about Trump's alleged or real new direction of Russian foreign policy alight. In that way, they determine the news agenda - and not the president's Twitter bulletins. They are in the offensive, Trump in the defensive.

Evil to him who evil thinks

The disclosures about Sessions surfaced shortly after Trump's speech before both houses of Congress. Evil to him who evil thinks. Because the President surprised many Americans with a halfway reasonable appearance. The Republicans immediately voiced their support for him. That's over now.

After the disclosures about Sessions went public, the first Republicans distanced themselves from the minister. In the meantime, he has had to promise to keep out of several investigations by the intelligence services into Russia connections by Trump's inner circle. As Attorney General, Sessions is in charge of the FBI.

It is a political victory for the Democrats. But will it last? At the moment, it is hard to estimate. The Democrats are walking a thin line. If Russia actually had influence on the election outcome, then it is worth every effort, every inquiry by the opposition party.

No understanding for political infighting

If there is nothing to the allegations, then this form of political dramatization could come back to haunt the Democrats. Because one thing is clear: for the coal miner in Kentucky, the farmer in Iowa or the taxi driver in New York other topics are more important. They want a health insurance that is affordable. They expect parliamentarians to lower taxes. They want better roads, a faster Internet, a cleaner environment. Most of the Americans have no understanding for spending millions of taxpayers' money so that politicians in Washington can provide a scenario for political infighting.

US President Donald Trump has accused Democratic lawmakers of conducting a "witch hunt" against Attorney General Jeff Sessions. Sessions has recused himself from probes into ties between the Trump campaign and Russia. (02.03.2017)