Opinion: A leader without leadership | World | Breaking news and perspectives from around the globe | DW | 07.11.2012

Opinion: A leader without leadership

The Americans have re-elected President Barack Obama. But will he learn from his first-term mistakes? There is good reason to doubt it, says Deutsche Welle's Miodrag Soric.

The sheen has come off. This time, the Americans did not lose themselves in a wave of euphoria for the great new hope that was President Barack Obama. Sad reality - whether economic or political - has robbed the president of his magic. It's true, the Americans have re-elected him, but that was more a vote against Mitt Romney than approval for Obama.

And no wonder. Obama, who once promised to bring Americans together, has only deepened the divisions in US society over the past four years. The two political camps are more estranged than ever. If the Republicans had found a better candidate, Obama would have stood no chance. 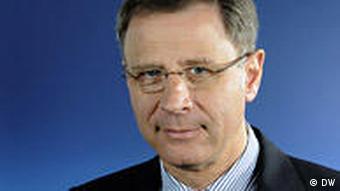 This president must throw off his arrogance and learn from his mistakes, otherwise his tenure will go down in history as a succession of failures. Unemployment remains high. The national debt breaks one new record after another. Infrastructure is in decline. University education is threatening to become a privilege for the rich. Obama's health care reform has helped millions of Americans, but at a considerable price, because the US cannot afford this reform, or indeed any other social benefits - at least not at the moment.

In the coming four years, Obama must focus on the economy. He should reach out to the Republicans, and should be more willing to make compromises. But he should lead, not mediate. Unlike Romney, he has never learned to lead. How could he? As a social worker in Chicago? As a university academic? Before Obama became president, he was just a local politician, or a senator - not a state governor, as Romney was. Even now, insiders describe the president as a stranger in his own cabinet, where members wait in vain for clear orders.

Obama's foreign policy record is disappointing. Arabs, Afghans, Iranians and Pakistanis alike all expected more from Obama, who could not even keep his promise to close Guantanamo Bay. Obama was forced to end the Iraq war - because it had become un-winnable, and the situation in Afghanistan could soon mirror the one in Iraq.

It looks like Afghanistan will be left to its own devices after 2014. In the meantime, NATO has just been muddling through, while more and more people in Washington are asking, "What do we actually need the alliance for?" And the president would prefer it if the Europeans dealt with the Balkans, since he is a lot more interested in China and Latin America.

And what of the Middle East? Obama and Israeli Prime Minister Benjamin Netanyahu often speak on the phone - but though they talk regularly, they only have bad things to say about one another. At the same time, the civil war in Syria is threatening to spread into neighboring countries. Christians in the Middle East are suffering more and more oppression - hundreds of thousands in Iraq, Syria, or Lebanon are being forced to leave their homes. Obama scarcely seems interested. "He leads from behind," people say in Washington. Whatever that means.