Opinion: A hard landing for Cyprus

In dramatic fashion, Cyprus' bankruptcy was averted. Both banks and investors will have paid heavily for it. But so, too, has the EU, says DW's Bernd Riegert - and it might be paying for quite some time to come. 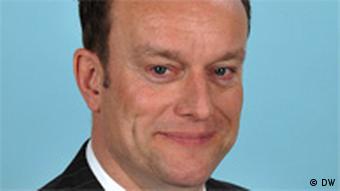 Cyprus did not go bankrupt, but its business model is gone, and it will begin a long slide into deep recession. Thousands of jobs in its bloated finance sector - one that accounted for around half of the Mediterranean island's GDP - will be lost. The Cypriot government fought hard to save its banks. In the end, it failed.

Olli Rehn, the EU Commissioner for Monetary Affairs, is right in saying that Cypriots face hard times. In the months and years to come, tax revenues will decrease dramatically. Expenses for social services will rise. Even today, it's safe to assume that the 10-billion-euro ($13-billion) aid package passed early Monday morning (25.03.2013) will not be enough to balance the state's budget.

Christine Lagarde, managing director of the International Monetary Fund (IMF), remained conspicuously vague in stating that Cyprus's debt would likely remain at 100 percent of GDP through 2020. Whether Cyprus' 800,000 citizens will be able to bear that burden remains unclear. One worry is that foreign investors, be they Greek or Russian, will now flee the country, taking their money with them.

Cyprus could become a permanent problem for the European Union.

The Cyprus bailout, at least in the form that was decided Monday morning, represents a drastic policy shift in the fight against the still-smoldering Euro crisis. For the first time, money is being taken directly from bank clients - without their permission - to unwind ailing banks. Investors with more than 100,000 euros in their accounts at the Laiki Bank, also known as Cyprus Popular Bank, will lose the majority of their money. Laiki, Cyprus' second-largest bank, is being phased out.

For bank clients throughout Europe, the signal is clear: Your money isn't truly safe anymore, because when nations are close to bankruptcy they will take whatever they can get their hands on. For banks, the signal is different. No longer will institutions that have bet and lost money in the capital market casino be saved at all costs. That had previously been the case with Greece, Italy and Spain.

There are a few catches. The majority stakeholder of Laiki is the state of Cyprus. The money Cyprus is losing will be returned in the form EU and IMF rescue packages. Numerous pension funds on the island also have their money invested at Laiki Bank. It won't be possible to simply confiscate those deposits. Whether the unwinding of Laiki will ultimately release the promised 4.2 billion euros has yet to be seen.

As for the European Central Bank (ECB), it's in a nice position. It had previously provided nine billion euros in loans to prop up Laiki Bank. Those debts will now be assumed by The Bank of Cyprus. In any event, the loans funded by European taxpayers will be serviced.

Exit a better solution for Cyprus

For Cyprus, then, the price of remaining in the currency union is high. Economically speaking, it would probably make more sense for the small island to leave the union and start fresh with its own, devalued currency. The other 16 nations that share the euro, however, were not ready for such an extreme step. They feared a global loss in trust in the eurozone. Nobody can predict the effect of a Cyprus exit.

From a purely economic perspective, Cyprus is of little relevance to the eurozone – and "systemically" speaking, not at all. EU nations don't need to fear the so-called domino effect of a Cyprus bankruptcy since Cypriot banks have hardly any debts abroad. Over time, branches of Cypriot banks in Greece will be split off.

Most agree that the crisis management of the eurozone, as well as that of Cyprus's government, was a disaster. Recent dramatic maneuvers were both harmful and unnecessary. They destroyed a lot of trust inside eurozone and well beyond it.

But banks in Cyprus could not be saved in their previous incarnations. That much has been clear since June 2012, when Cyprus applied for aid because of the losses it bore in the wake of Greece's rescue. The Cypriot government negligently delayed dealing with those issues - and the eurozone tolerated it. Only the ECB's ultimatum of a complete cessation of Cyprus aid proved enough of a wake-up call.

This process has shown that the ECB is in charge - and not finance ministers. And that is not a good development. After all, who controls the ECB?

The parliaments in Germany, the Netherlands and Finland still have to pass the Cyprus deal, which they likely will. The Cypriot parliament won't have any say at all. This will surprise some parliamentarians and make the Cypriots even angrier with Europe, but they don't have an alternative. When it came down to it, Russia gave Cyprus the cold shoulder. Now the small state in the Mediterranean has to stick to the conditions or leave the eurozone.

Cyprus, EU and IMF have agreed on a bailout plan for the island state's ailing financial institutions. Bankruptcy seems off the the table but many of the large investors will have to swallow hefty losses. (25.03.2013)

The attempt to rescue Cyprus’ ailing banks has threatened to become a major misadventure for the eurozone. Europeans are worried about the security of their savings, says DW’s Bernd Riegert. (18.03.2013)