With soaring temperatures across Europe, police have to protect their canine units from burning asphalt. Veterinarians have warned that pet owners need to be extra vigilant in sweltering conditions. 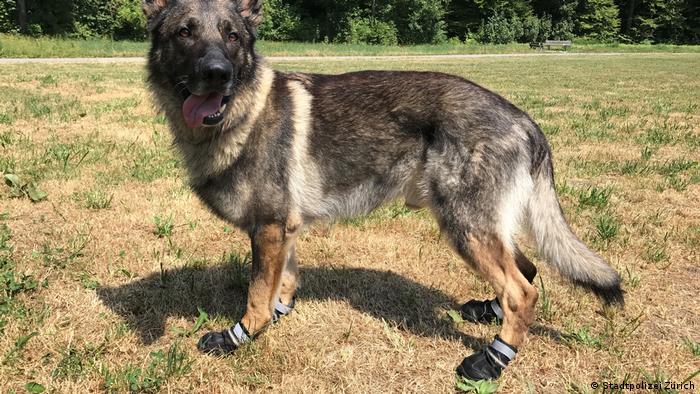 As temperatures in Europe continued to climb to record heights on Tuesday, police in Zürich were forced to take special measures to protect their canine companions.

Dubbed "Operation Hot Dogs," police in the Swiss city shared pictures on Facebook of the force's canine unit wearing specially-made shoes to protect their paws. While local temperatures remained in the 30s Celsius (80s-90s Fahrenheit), the city's asphalt could reach up to 55 degrees C (131 F), the officers warned.

The Neuer Zürcher Zeitung daily said that dog owners should be especially careful during the heatwave to give their dogs extra water, and to avoid letting their pets over exert themselves. Walks should be taken in the shade, and dogs should not under any circumstances be left in parked cars in this heat.

Unrelenting heat has led to sporadic wildfires and drought across Germany and Sweden and its expected to have serious repercussions on their neighbors as well.

On Monday, scientists confirmed that the heatwave is linked to global climate change.

For weeks, farmers in Germany have been waiting for rain and are now calling for a billion euros in government aid. But German Agriculture Minister Julia Klöckner says she has to wait for data before doing out any money. (30.07.2018)