Opening of the Salzburg Festival

With the motto "Inequality," the world's biggest festival in the genres of concert music, opera and theater begins on July 18. The attractions include three new opera productions and a work never before performed there. 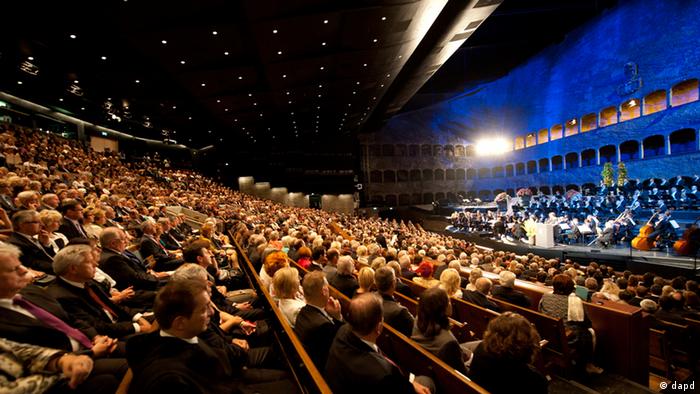 In accordance with festival co-founder Max Reinhardt's saying "The whole city is a stage," the festivities begin with a "Fest in the Fest" on July 18 and 73 cost-free events at 29 locations across the city where Mozart was born. Also popular are the free festival nights with current and historic festival productions on big screen.

The festival officially begins with the "Ouverture Spirituelle," Joseph Haydn's oratorio "The Creation" (conductor: Marc Minkowksi) followed by a week of sacred music, this time focusing on Hindu traditions. Day Two of the festival sees the ritual open-air performance of "Everyman," the play by festival co-founder Hugo von Hofmannsthal.

In the six weeks following, star performers draw audiences to the city of 150,000 inhabitants. They include Plácido Domingo, who is celebrating an anniversary, having first stood onstage in Salzburg 40 years ago. This time, the 74-year-old Spanish singer performs next to Russian diva Anna Netrebko in Verdi's "The Troubadours." 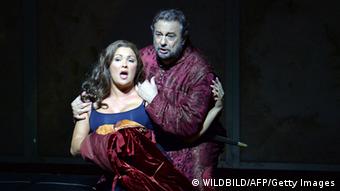 Social and historical hierarchies - and those in personal relationships - are spotlighted in this year's motto "Inequality," announced by program president Helga Rabl-Stadler and interim director Sven-Eric Bechtolf.

The headliner among the season's new opera productions is "The Conquest of Mexico" by German composer Wolfgang Rihm, which deals with the meeting of the victorious conquerer Hernan Cortez and the vanquished Aztek king Montezuma. Veteran stage director Peter Konwitschny is joined in the production by conductor Ingo Metzmacher.

In a new performance of Mozart's opera "The Marriage of Figaro," Dan Ettinger leads the Vienna Philharmonic, the theme "Inequality" illustrated in the plot in a reconciliation between men and women, masters and servants.

In another new production - of Beethoven's "Fidelio" - Claus Guth is the stage director, Franz Welser-Möst the conductor, and Adrianne Pieczonka and Jonas Kaufmann depict the protagonists Leonore and Florestan.

For the first time, the Salzburg Festival is staging "The Three Penny Opera" by Berthold Brecht and Kurt Weill, and in two versions: in the original, performed concertante with celebrated German singer Max Raabe in the role of Macheath; and in a scenic version, with the music given a new adaptation. 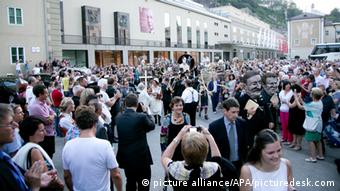 The audience loves a ritual, here in the festive procession before the performance of "Everyman"

Solo performances are scheduled with prominent artists like cellist Yo-Yo Ma and pianists Maurizio Pollini and Pierre-Laurent Aimard. The "Salzburg Contemporary“ concert series portrays composer Pierre Boulez, who celebrated his 90th birthday this year. And "The Vienna Philharmonic and its Composers" series presents works written on behalf of that orchestra or that have a historic connection to it.

With 250,000 tickets available and a budget of 61 million euros ($66 million), the Salzburg Festival is considered the world's largest and most renowned. The current season, lasting until August 30, has 188 performances altogether.

Rounding out the program are side-events such as the festival's renowned conducting competition "Young Directors Project" and a performance of Rossini's "The Barber of Seville" in a version for children.

Black tie is a must as some of them, and yes they can be as stuffy as they sound. But these classical music festivals are worth getting spiffed up for, says DW's Rick Fulker. (14.07.2015)

Save these classical dates in 2015

Subscriptions, opera companies, stars: it's well-nigh impossible to get a handle on the classical music scene in Germany and Austria. For pre-orientation, here are some of the most important festivals in 2015. (02.01.2015)