A penny saved is a penny earned: The maxim may be worth keeping in mind for artists and journalists as they turn to "crowd funding" to make money. It's a principle that lets many users donate a little at a time. 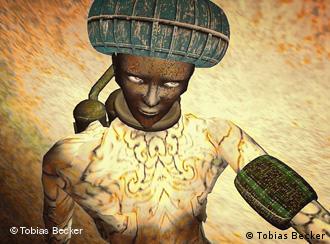 They're an institution practically the whole world over: musicians who take to the streets to perform, hoping passers-by will toss a few coins in their hat. But some of today's "street" musicians are putting their hats out in cyberspace instead of on sidewalks.

Tobias Becker is one example. The musician studied film composition and sound design, and he plays oboe, guitar and synthesizer. Three years ago, he bought a little plot of land in the online platform Second Life.

"I built a stage for myself, and I give live concerts there," said the 52-year-old. And he's even earned some profits from it by using a principle known as "crowd funding." People that like his music can express their enthusiasm by donating money.

Second Life is a virtual world where users can take on a graphical persona. Like Tobias Becker, many people have found a way to incorporate their professional lives into Second Life. Becker's fans can book seats in advance for his virtual concerts and then send their Second Life characters to hear them.

The technical possibilities are the most fascinating part of the website for Becker.

"For instance, I can lay a ball on the floor, and when someone touches it, it makes a certain sound," he explained. He creates the sounds himself in his sound studio. Sure, it's just playing around, he said, but it's a lot of fun.

After Becker's shows, the audience can offer their thanks in the chat window or donate to him.

"If they click on me, a window opens where they can hit 'pay' and say: I want to donate 100 Linden dollars," he explained.

"But after all, a penny saved is a penny earned," the musician mused. 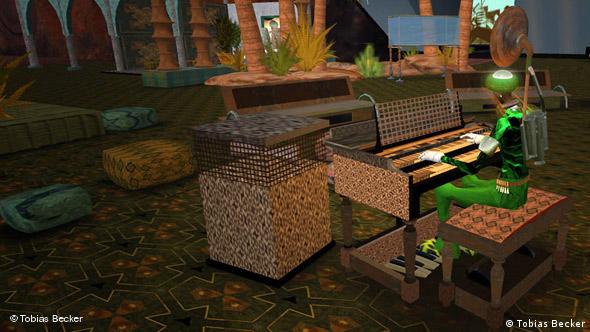 Becker is ready for an audience in Second Life

Musicians aren't the only artists making use of "crowd funding." Mixed-media artist Daphne Arthur asks for donations via video on the creative funding platform kickstarter.com. She has been invited to attend the Biennale in Florence but can't afford the travel costs. Her Internet fan-base may just be able to help get her and her art to Italy.

People who want to support a number of projects rather than just one can split the money they intend to donate using the crowd funding platform Flattr. The website offers to divide a user's monthly donation budget equally among various projects.

There's also a banner available to website owners that lets readers and users know they can donate to their favorite websites by using Flattr. At the beginning of the month, Flattr users decide how much they plan to donate, and that amount is then split up among all of the sites they've designated as favorites.

Just how well the principle of crowd funding works is still open for debate. But the phenomenon is spreading - also to journalists by way of platforms like spot.us. Reporters can enter topics or ideas and let interested users fund their research and travel costs.

"It represents a new way for journalists to do their work. Until now, they had to sell their ideas to editorial departments, but now they can go directly to their public to find out what they want," said Annika Sehl, who researched the topic for her doctoral dissertation. But she stressed the importance of not letting journalistic independence get lost along the way.

Once a journalist product has been realized through user donations, it usually ends up being sold to the traditional media. Otherwise, it may appear in blogs or on the various "crowd funding" platforms themselves.

Newspapers are also looking for ways to make use of crowd funding by offering users the chance to donate money to articles that they especially liked. Berlin-based daily Die Tageszeitung took in around 1,000 euros ($1,300) using that method last year, said Annika Sehl.

For a company, it's a trifling sum, but musicians like Tobias Becker would be thrilled to earn that much. Becker takes the question of finances in stride, though.

"A couple of times, I've earned about 40 dollars and when I think, I'm just sitting at home in my living room and playing for an hour - that's pretty good!"

A basic device is helping Indians get online without being in front of a computer. The Question Box lets users tap into the Web via telephone operators. Its founders say it could help bridge the world's digital divide. (14.05.2010)