One year on, aid organizations try to prevent total collapse in Haiti | World| Breaking news and perspectives from around the globe | DW | 11.01.2011

One year after the catastrophic earthquake, Haiti's 9 million people are still struggling to recover their livelihoods. On top of the pervasive poverty, everyday life still involves the threat of violence. 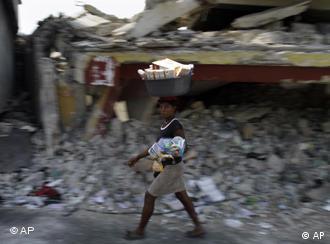 Barely a third of the rubble has been cleared

The piles of rubble have got smaller, but every meter of the road from Port-au-Prince to the coastal town of Leogane still carries memories of the day when Haiti was turned into the most helpless country in the world in less than a minute. It's almost as if the deep, meter-long tears in the tarmac inscribe the fateful date January 12, 2010 into the land itself.

The road has been literally torn up - in some places there are half-meter steps in the middle of it. Every day, a convoy of cars, buses and SUVs struggles painstakingly along this route, and one thing is clear for everyone who has to make this journey - Haiti is still a long way away from normality.

Around 60 percent of Haiti's buildings collapsed in the earthquake, some 190,000 in the capital Port-au-Prince alone. Some estimates suggest that less than a third of the rubble has been cleared. Over 230,000 people were killed and 1.3 million were left homeless. One year on, almost all of them still live in improvised camps that have slowly become more permanent. 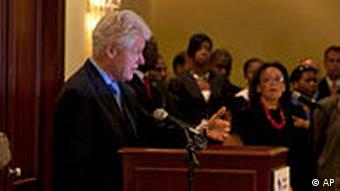 The international community has pledged billions in aid

The country's infrastructure is still decimated, and the unemployment rate is at 80 percent. Exacerbating the ubiquitous poverty, violence has become endemic, with regular lootings and street battles, while women are often raped in the camps.

On top of all this, a cholera epidemic broke out last October that has already claimed 3,500 lives. Despite the many aid organizations on the ground, and the $10 billion (7.7 billion euros) pledged by the international community, Haiti is still desperately struggling to get back on its feet.

"This is not a 100-meter sprint, this is a marathon," says Patricio Luna of the aid organization Caritas International. Luna has been in Haiti for several weeks, and despite the difficulties, he believes the aid work is now entering its second stage. The emergency relief stage is over, "now the long-term rebuilding phase can begin," he told Deutsche Welle.

One small statistic makes clear how laborious this process is: every week, Caritas gives two houses to families from the camps. The target is to build 4,000 houses in the Fort Hugo district to create a new settlement.

But before any new homes can be constructed, the ownership of the land has to be ascertained. That is difficult when the public authorities - less than efficient at the best of times - collapsed almost entirely in the earthquake. Whole ministries and local administrations were razed to the ground.

"There is no point starting construction if someone comes along later and claims the land," says Luna. "It's better if we wait two months and make sure that the buildings are legally watertight."

But Luna says the Haitian people are patient, and contradicts the reports of violence. "Of course people can see that things are happening very slowly," he says. "But they keep their nerve." Luna believes that while small clashes do occur every now and then, the majority of the population is peaceful and has preserved its pride and dignity. 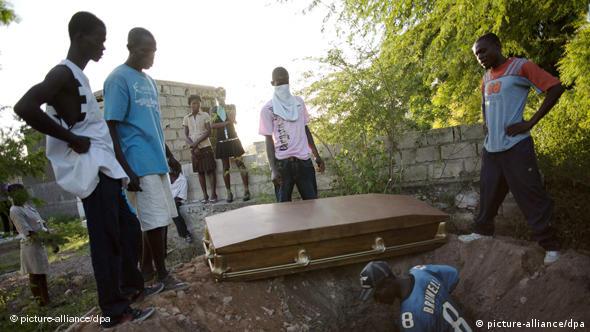 The slow pace of recovery has been partly caused by the fact that many temporary initiatives, started spontaneously in the immediate aftermath of the quake, have since pulled out. "There are a lot of them. I have to say that quite clearly," says Frank Doerner head of the German section of Doctors Without Borders. "A lot of them are still registered in the coordination groups, but few are still actually active."

There are only estimates of the number of aid organizations that are still active in Haiti. There should be several hundred, but they all contend with administrative problems, unclear building regulations, corruption and deliveries that get held up at the border with the Dominican Republic.

Simone Pott of the German charity Welthungerhilfe says coordination and communication are huge problems. "That has a lot to do with the fact that the international community and the United Nations have very few reliable dialog partners," he said. "When you want to talk about rebuilding infrastructure, for example, you have to be able to find the responsible ministry."

For this reason, German aid organizations have begun to concentrate on rural areas, where jurisdictions are apparently clearer.

Getting the money flowing

The administrative difficulties are also holding up the cash flow. The international community has faced increasing criticism that promised aid money has not materialized. At last year's donors' conference in the neighboring Dominican Republic, the US and Venezuela launched into a kind of bidding war over who would offer the most money. But so far only a few countries have delivered their promised contribution in full. 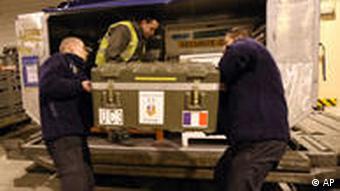 Aid workers say all they can do is prevent total collapse

On the other hand, their reticence is understandable, given that governments want guarantees that taxpayer's money will get turned into aid. These are difficult to get given the bureaucratic mess in Haiti.

Only the aid organizations, who manage their own facilities and keep their own personnel on the ground, have been keeping Haiti from total collapse so far, but their resources are finite. "At the moment we have over 8,000 people on the ground who need their salaries," says Doerner. "We have 3,200 cholera beds, over 1,000 hospital beds. We have seven large treatment clinics. We spent over 100 million euros there last year."

At some point, public donations will run out, and the world's attention will be turned elsewhere. So for the aid workers, time is running out for them to make some progress. Many have long since given up the illusion that they will be able to transform Haiti. Instead, they see themselves as preventing a complete collapse. "I can promise everyone that their donations will really get to those who need it," says Luna of Caritas, but warned that for now, all that can be done is to lessen the suffering of the Haitians.

Elmar Frank, director of the German charity Deutschland Hilft, agrees: "Considering the dimensions of the catastrophe and the situation in Haiti before the disaster, you're really looking at four to five years before there will be any significant changes in Haiti."

Presidential elections in Haiti have been validated despite widespread protests of vote-rigging. Twelve of the 18 candidates withdrew before voting began, accusing incumbent Rene Preval's party of steering the election. (29.11.2010)