One year as president: Donald Trump as cover boy

During Donald Trump's first year in office, editors and illustrators have let their creativity run wild, inspiring more than a few cartoons. Here's a selection of some the best covers depicting the president.

Much to the surprise of most political observers, the real estate magnate, loudmouth and all-around posturer Trump had won the election for the Republicans in November 2016. Following that shock, many people hoped he would tone down both his speech and his behavior once he took office after both dividing his party and then attacking his opponent Hillary Clinton.

By January 20, 2017, when Donald Trump was inaugurated as President, t​​​he initial shock had slightly dissipated, but his antics never ceased to shock and surprise.

No hope for moderation

Reality trumped hope on Inauguration Day. Following the inauguration in front of the Capitol, Trump gave a speech that dispelled any doubt about what he and his followers had in store for the next four years. It was a battle cry against his opponents, headlined with "America First."

Even the festivities surrounding the inauguration became material for continued feuding between the media and the Twitter-addicted president, who took over the user name @potus (short for "President of the United States") which his predecessor Barack Obama had developed, all while keeping his private Twitter account. 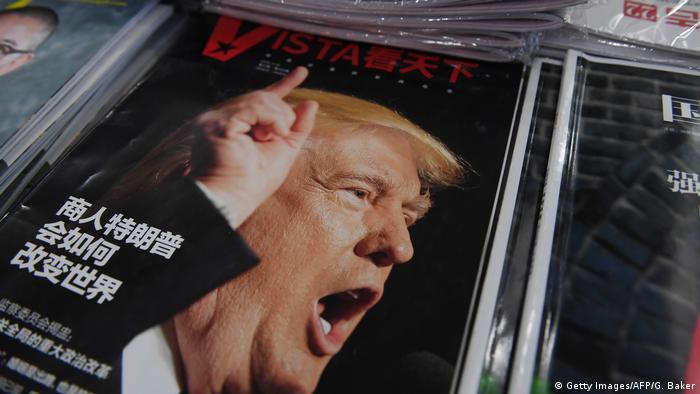 Trump on the cover of a Chinese magazine

Trump accused those who criticized him of reporting "fake news." That attitude took on bizarre dimensions. Just after taking office, he insisted that never in the history of the country had so many people attended the inauguration of a president as his own. To confirm it, his staff presented information that was proved to be false, but which they called "alternative facts."

For serious journalists and satirists alike, Trump's term as president has proved to be a challenge. What jokes can still be made when the protagonist has made himself a perpetual laughing stock?

Still, illustrators, editors and reporters have found a way of addressing the unique features of the moody, cowboy-like US president — varying from the subtle to the bawdy.

View our picture gallery to see how they have used magazine covers to depict his first year in office.

Steve Bannon, once hailed as the mastermind behind Donald Trump, was forced to step down from his post at Breitbart. Bannon has run afoul not only of Trump, but also of his key backers from the wealthy Mercer family. (10.01.2018)

Martha Rosler: 'The struggles of our time are against the toxic masculinity of men in power'

The American artist is known for not being afraid to voice her political opinions. DW spoke to her about the state of the American Dream, the role of artists in turbulent political times and US President Donald Trump. (25.12.2017)