One Arab project could change Bosnia-Herzegovina | Europe | News and current affairs from around the continent | DW | 19.10.2015

One Arab project could change Bosnia-Herzegovina

Twenty years after the 1992-95 war, Bosnia-Herzegovina is struggling to revive its economy. Unstable politics and a cumbersome bureaucracy are the main obstacles to foreign investment, but one project may change that. 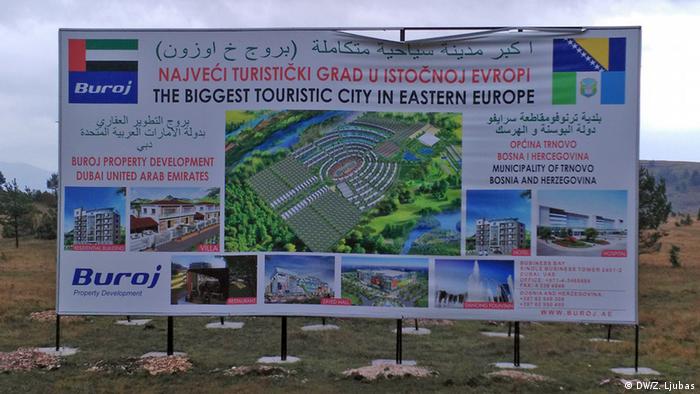 “This will be a tourist city with more than 2,000 villas, several apartment hotels and 160 residential buildings. It will also have the biggest shopping mall in this part of Europe – Zayd Shopping Mall – with shops and other facilities on more than one million square feet of space, as well as a hospital – Ozone Hospital,” Ismail Ahmed, Executive Director of the Dubai-based Buroj Property Development Company told Deutsche Welle. Some elements of his hometown Dubai are also to adorn the Buroj Ozone city, like dancing fountains.

According to some preliminary figures, the project is expected to cost more than 4 billion euros. Such extensive Arab investment interest in Bosnia-Herzegovina and the large sums of money have provoked media speculation that the Arabs are spreading in Bosnia because of the Muslim majority and have built mosques across the country.

Ahmed claims the project has nothing to do with religion or nationality, but only with business. “This is international and open for all. Our targets are tourists from the Arab world, but also from Europe, Africa and all other countries.” As he stressed, everyone is most welcome because “when you make a business or investment, you do not care about the nationality, but you care about business. So, this will not be for the Arabs only, but for everyone.”

One of the most expensive and definitely the biggest tourist resorts in southeastern Europe will be built some 15 kilometers (9 miles) from the Sarajevo International Airport on some 1.3 million square meters in the foothills of the Treskavica, Bjelasnica and Igman mountains. 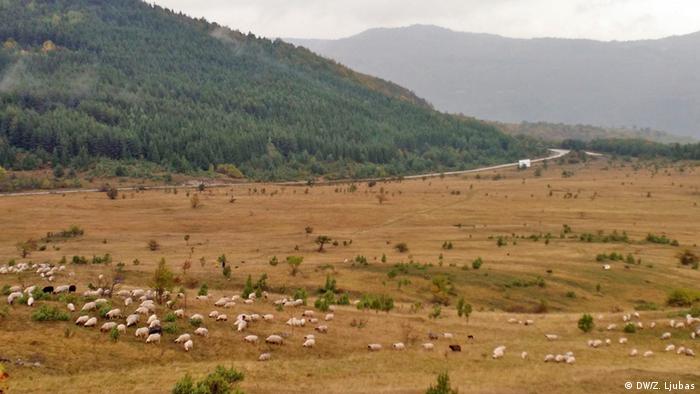 Sheep in the Bosnian highlands: An image soon to be replaced with luxurious villas, parks and fountains.

Remarkably, the Buroj Ozone location will be built in the town divided by the imaginary border line between Bosnia's two ethnic entities – the Serb-run Republika Srpska and the (Muslim-Croat) Federation of Bosnia and Herzegovina. The municipality had some 7,000 inhabitants before the 1992-1995 war, while now some 5,000 people currently live on each side of the ethnically split village. The project, so far, is intended for the Federation entity only. It is evident, however, that both entities, and the entire country, would benefit from the project.

Local residents, though not so willing to talk, mostly share hopes that everyone will benefit from the Arab investment. While waiting for a bus at a local stop in the Serb part of Trnovo, one woman, who introduced herself as Rada, said she hoped her friends and neighbors will get the opportunity to find some job in the new tourist city. “I work in a shop in Sarajevo, but I also hope they will need some salespeople, too, so I can apply as well. I would not mind a better salary,” she said. She also said she is not afraid of Arabs, as long as they keep a fair relation with the locals and as long as they are ready to invest.

Everyone hopes for a job 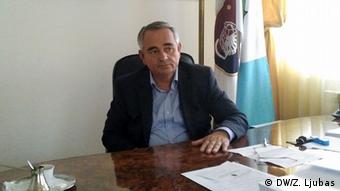 Ibro Berilo, Mayor of the Muslim part of Trnovo, hopes for 10,000 new jobs

The mayor of the (Muslim-Croat) Federation part of Trnovo said the new city will offer a lot of work for locals, regardless of nationality. “At least 10,000 people will find job in the Buroj Ozone. What we agreed so far is also aimed at strengthening the economy of this country, as only local companies and local materials will be engaged in this project,” said Mayor Ibro Berilo. Once the city is built, he said, the profits from its incomes will be shared 70:30 percent between the investor and the municipality. Berilo stressed that not only the Muslim part of the village will profit, since the intention is to further develop the entire area, regardless of the administrative or ethnic borders.

Not only the people of Trnovo, but the entire Canton of Sarajevo, according to Berilo, are happy to see the actual start of this project, to see concrete action. To them, it still looks like a fairy tale in a country where more than 45 percent of the roughly four million people are unemployed. The first concrete step, after a year of negotiations, was sealed with the final contract signing in Sarajevo on October 15. The initial construction phase of the Buroj Ozone is slated to begin in April 2016.

While Arab investors were looking for a beautiful natural setting, plentiful water and higher concentration of ozone - a place in short to escape the hot Arab weather - the people of Sarajevo are concerned about problems that may occur with water, since one of the important sources of water for the city is located under the mountains near the future construction site. Mayor Berilo has given assurances, however, that all the “spring water and reserves are under careful control and will not be endangered by the Buroj Ozone project now or in the future.” 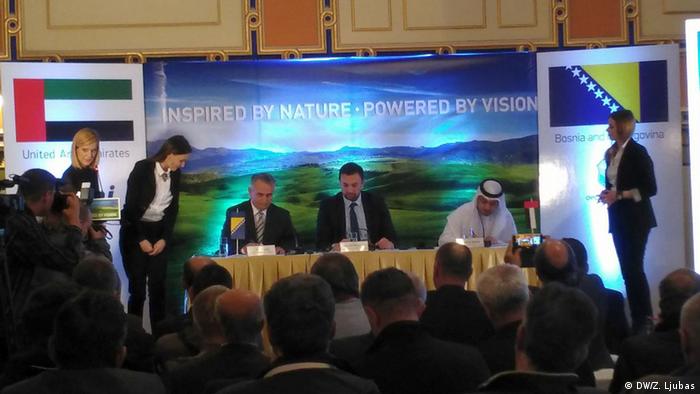 The final contract was signed in Sarajevo. First construction is expected in April 2016.

A mix of modern and traditional – classic buildings to form some sort of a U-shaped city that melts with the surrounding hills and woods, Buroj Ozone city is expected to be completed in the next eight to 10 years.

But why Trnovo, a village remembered as one of the most underdeveloped places in the country before the 1992-1995 war?

Ibro Berilo explained that the Arab businessmen spent a month in Bosnia-Herzegovina looking for a possible place for a tourist resort. “On the 30th day they came to Trnovo. They stopped, looked, took a breath and said that this is Jannah (paradise in Islam).”

New Arab paradise, or oasis in Bosnia-Herzegovina: either way it will bring the country the biggest single foreign investment ever.

According to statistics from the country's Central Bank (CBBH) and its Foreign Investment Promotion Agency (FIPA), the countries of the Gulf region, so far, had not been on the list of the top ten foreign investors in Bosnia-Herzegovina. Since the end of the 1992-1995 war, most investments in the Balkan country came from Austria, Serbia, Croatia, Russia, Slovenia, Germany, Switzerland, the Netherlands, Great Britain and Luxembourg.

Some changes have already been noticed, like a significant increase in tourists from Dubai, who heard about Bosnia and Sarajevo and are getting more interested in what this Balkan country has to offer.

Foreign investors, however, remain skeptical about investing in this country because of the unstable political situation, the high rate of corruption and, above all, the slow and expensive bureaucratic procedures. But now, many hope the Buroj Ozone will finally break the ice.

German Labor Minister Andrea Nahles is planning to grant 20,000 work permits annually for people from the West Balkans. It could be a win-win for job-seekers and the German economy. (20.09.2015)

The EU has no real strategy toward the West Balkans, Professor Ulf Brunnbauer tells DW prior to the EU-Western Balkans conference in Vienna. (27.08.2015)

Opinion: The failure of the political elite in the Balkans

Almost half of Germany's asylum applicants come from the Balkans. Why are they coming, and what are they fleeing from? DW's Verica Spasovska writes that the region's political elites are to blame for the exodus. (15.08.2015)