On Victory Day, past and present collide in Berlin | Germany | News and in-depth reporting from Berlin and beyond | DW | 09.05.2022

On Victory Day, past and present collide in Berlin 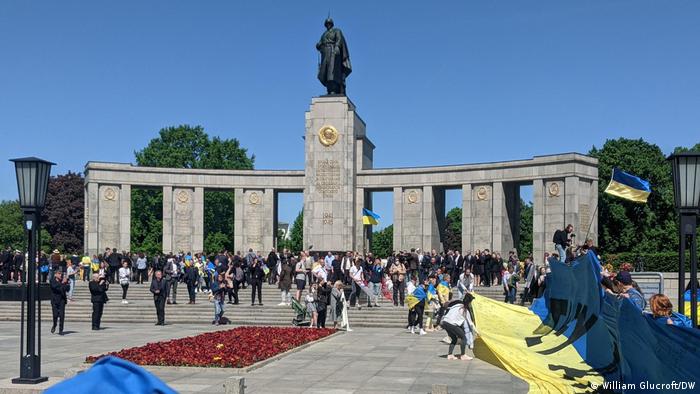 In Berlin, the past is always chasing the present. On some days, like Victory in Europe Day on May 8 and 9, it catches up. The occasion, which marks Nazi Germany's unconditional surrender to Allied forces, always brings out activists to push their particular version of history and understanding of good guys versus bad.

This time around, 77 years later, Russia's war in Ukraine has challenged how the deadliest war in human history gets collectively remembered, as images of devastation that many thought were the stuff of history books now play out in real-time. Though German capitulation took place in Berlin on May 8, 1945, it was already the next day in Moscow. That spreads out events over two days.

Emotions and complex narratives were on display at the Soviet War Memorial in Berlin's Tiergarten.

On Sunday, the Ukrainian embassy oversaw a wreath-laying ceremony. As foreign dignitaries and German officials arrived, a few hundred pro-Putin and pro-Ukrainian protesters lined up on the street just outside.

Under the watchful eye of dozens of police officers, the two sides traded heated, but peaceful, barbs — re-litigating the past, praising the Red Army's sacrifices that helped end the war, and feuding over who the real fascists now are. 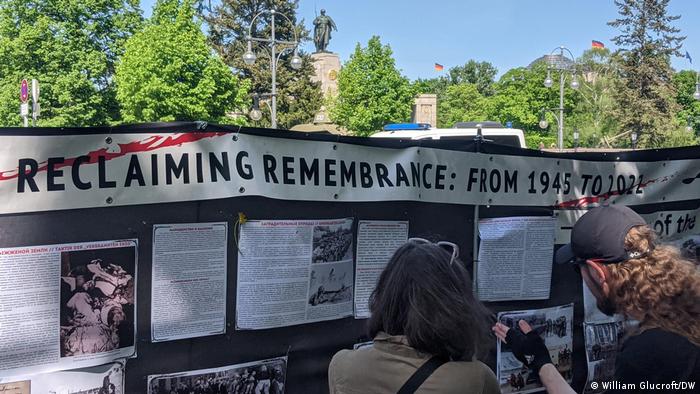 When Ukraine's ambassador to Germany, Andriy Melnyk, arrived, pro-Putin protesters shouted "Nazis out" and "Melnyk out." That follows the official Russian line that its "special operation" in Ukraine is a continuation of its fight that liberated Germany from Nazism.

"I'm supporting the right people," one woman told DW, who refused to say her name or where she was from, except "far away." The red carnations in her hand — a common flower among Russia sympathizers — and her standing on the pro-Putin side of the crowd suggested where her loyalties lay.

In response, Ukraine's supporters chanted "slava Ukraini" — "victory to Ukraine," which has become a rallying cry in the war — and "save Mariupol."

While Berlin's government restricted the display of both sides' flags and other national symbols to official events only, Ukraine's colors among protesters came out in other forms, such as clothing and dyed hair.

"It's sad that even in Germany there are some people who buy into Putin's propaganda," said Kaspar Kado, a 29-year-old Russian who lives in Berlin. Holding up a sign that read "it's happening again," he said that Ukrainians being driven from their homes reminds him of German troops sending his grandmother to Germany for forced labor in World War II.

"When I was growing up in Russia there was a narrative about 'never again' when talking about World War Two," he said. "Putin brought back these terrible war crimes. I feel betrayed." 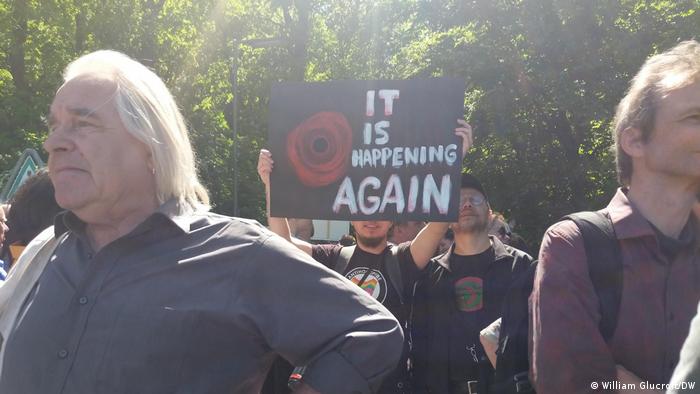 The parts of the Soviet whole

Thousands of Soviet soldiers are buried in Tiergarten, not far from the Brandenburg Gate and the German parliament. Today the area is a favorite spot for walking tours, and peaceful strolls through greenery and along wide boulevards. In 1945, it was witness to a brutal final battle whose scars remain visible as bullet holes in building facades.

Germany is obligated to maintain sites like these as part of an agreement that led to Russia withdrawing its troops in the early 1990s. The Soviet Union had just collapsed, and power was transferred to the new Russian Federation. Other parts of the Soviet Union, such as Ukraine, feel their sacrifices have been erased from history.

"They're trying to say that only Russia defeated the Nazis, and this is not true," said Natalia, who declined to give her last name for security reasons.

Something as simple as a year can be politically charged. While Soviet memorials, such as the one in Tiergarten, often bookmark the war between 1941 and 1945, for other Eastern Europeans the state of terror and oppression started with the Nazis in 1939 and continued with the Soviets after 1945.

For Natalia, seeing Ukrainian flags flying at a memorial typically associated with Russia was an appropriate course correction in how the history is remembered. The 24-year-old activist from Kyiv, who said she was studying in the eastern German city of Leipzig when the war started, wants to challenge Germany's understanding of whom the country owes for ending the Nazi dictatorship.

"You can't go around Berlin and see quotations from Hitler, but you can go to Treptower Park and see quotes from Stalin, and everyone knows how many evils Stalin created for his own people in Soviet times," she said. 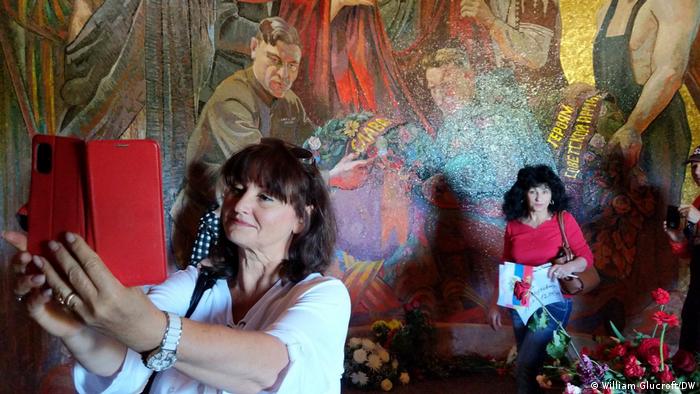 Hundreds flocked to Soviet war memorials, like the one in Berlin's Treptower Park

The sword that smashes the swastika

She's referring to another Soviet burial site-cum-memorial, the largest in Germany, built in the Berlin's eastern Treptow district shortly after the war. The sprawling, symmetrical complex leads to a 12-meter tall bronze statue atop a grassy mound — a Soviet soldier holding a child in one arm and, in the other, a sword smashing a swastika.

On Monday, as they do every May 9, pro-Russian, far-left and anti-Western associations gathered to pay their respects, along with representatives of foreign countries — mostly former Soviet republics — and their guests. Hundreds of people lined up to climb to the statue, where flowers and messages of thanks to the Red Army piled up.

For some there, World War II is literally not over. They claim that Germany never officially surrendered and fascism still runs rampant in the form of western capitalism. That bleeds into the Kremlin's view of the war in Ukraine, which sees it as provoked by American imperialism and NATO's eastward expansion.

"We drove out the fascists from East Germany, but they reconstituted themselves in the West," said Uta, an 80-year-old activist from eastern Germany who declined to give her full name to DW.

Germany's "Zeitenwende," the policy paradigm change which Chancellor Olaf Scholz declared in response to Russia's invasion in February, does not go down well with many in this crowd. New spending for Germany's armed forces, and sending weapons to Ukraine to do battle with Russia, is evidence of history repeating itself.

"If Russia loses — that just can't happen," Uta said. "They are truly against fascism and militarism."

The war in Ukraine overshadows Moscow's annual celebration of the Soviet victory over Nazi Germany. Following the huge military parade, the Russian president has claimed Russia is defending the "Motherland" in Donbas.