On the chessboard of the powerful, is Serbia a pawn? | Europe| News and current affairs from around the continent | DW | 10.06.2015

On the chessboard of the powerful, is Serbia a pawn?

Serbia kept close to Russia until the country interfered in Ukraine. Now, the ex-Yugoslav nation has become increasingly interesting to the United States - an interest Serbia has done nothing to discourage. 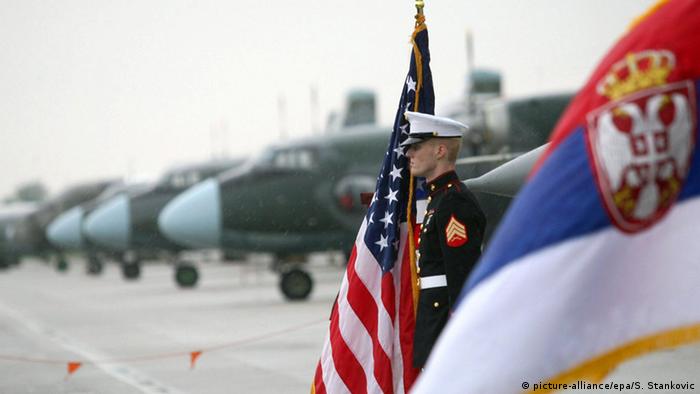 There aren't many top politicians today who still know the names of the entire Russian ice hockey team that flew to Lake Placid, New York, as the favorites to win the gold at the 1980 Winter Olympics. Nor many that were so disappointed when the United States beat the Russians 4-3 in a game that would go into the US history books as the "Miracle on Ice."

"I could barely sleep after the game," current Serbian Prime Minister Aleksandar Vucic said in an interview. A 9-year-old hockey fan during the 1980 Olympics, Vucic grew up to be a radical Serbian nationalist whose politics were defined by a love of Russia and a hatred of the US. But that all seems to be history now. Last week, following a three-day trip to the United States, Vucic spoke of partnership with "our American friends."

Until recently, Serbia had been viewed as a Russian client state. "Gas is one of the big reasons for the revival of strategic games in the Balkans," Milan Culibrk, editor-in-chief of the Belgrade weekly newspaper NIN, told DW. Like other countries in the region, Serbia is dependent upon Russian gas, which flows along an uncertain route through Ukraine and arrives at prices that no longer evoke the countries' former solidarity. That is why, for years, Serbian power brokers have pinned their hopes on the construction of the South Stream Pipeline, a Russian project designed to deliver the much-needed gas via the Black Sea and Bulgaria. However, South Stream has been thwarted by EU regulations. Recently, Gazprom also announced that it would cease pumping gas through Ukraine in 2019.

"Serbia is forced to look for alternatives," Culibrk said. "One option might be the planned Russian pipeline running through Turkey, if it is ever built. Another possibility might be linking into the Trans Adriatic Pipeline, which is supposed to deliver gas from Azerbaijan. Or, alternatively, buying US liquid gas, which could one day be transported to the Croatian island of Krk." 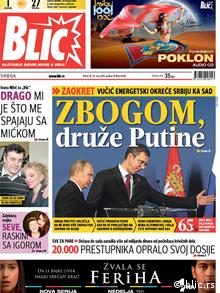 If you read it in the papers, it must be true: "Farewell, Comrade Putin"

Prime Minister Vucic calls this search for new gas supplies "diversification." Yet many believe that Serbia is turning away from Russia and embracing the United States. The mass-circulation newspaper Blic recently printed the headline "Farewell, Comrade Putin."

Vucic didn't just return home from the United States with new energy supply alternatives. After several meetings with prominent politicians and business leaders, he spoke about more foreign investment and US support for the speedier integration of Serbia into the European Union. The country has been an official EU membership candidate for over three years. However, negotiations for accession have not yet begun. Many observers have read this as a kind of silent sanction for Serbia's continued good relations with Russia.

Despite this newly discovered partnership with the United States, the cultural and historical connections between the Serbs and the Russians - two Slavic Orthodox peoples - still run deep. A recent poll of Serbs found that over 50 percent view Russia in a positive light. Moscow is also seen as the guardian of "Serbian Kosovo." The former southern province, which declared its independence in 2008, is recognized by most countries as a state, but not by UN Security Council member Russia. On the other hand, in 1999 the United States conducted airstrikes against Serbia to end the Kosovo War - but also killed hundreds of civilians and left destruction and devastation in its wake.

These days, the subject of Kosovo is mostly present as a type of ritual in Serbian politics, according to Jelica Minic from the NGO European Movement International. That is why the "goodwill gesture" by US businesses could change the mood. "The emotional connections are not insignificant, but, above all, people are pragmatic - and willing to support whoever can make the survival of the national economy possible," Minic told DW.

Experts are unanimous: Ever since Russia began interfering in Ukraine, Serbia and the rest of the Balkans have grown increasingly interesting to global powers. In February, US Secretary of State John Kerry said that these countries were "in the line of fire." Serbia plays a special role in the larger scheme of things - not only has it opposed sanctions against Russia and participated in Moscow's Victory Day military parade, but Belgrade is in possession of this year's rotating presidency of the Organization for Security and Cooperation in Europe. Beyond that, Minic said, Serbia lies at the heart of the Balkans, which is not to be geopolitically underestimated: "Neither the West, nor Russia, nor Turkey - which also has a particular interest in the region - can afford to neglect their relations with Serbia. For us, that is potentially an advantage, but it also contains dangers."

According to the newspaper Blic, Serbia is under tremendous pressure from both sides. "The West says that Serbia has the right to maintain its friendship with Russia; the Russians say they don't have anything against EU membership for Serbia," Blic reported. "Neither side is telling the truth."

NIN's Culibrk is also worried: "The Balkans are still the place where the interests of the powerful are woven together into a giant invisible network."

And the game goes on. Immediately after his US visit, Prime Minister Vucic received an invitation to Moscow from his counterpart, Dmitry Medvedev, even though Russian Foreign Minister Sergei Lavrov had just visted Serbia in May. The next special guest will be visiting Belgrade in the beginning of July: German Chancellor Angela Merkel.