Economists Oliver Hart and Bengt Holmstrom have been named winners of the Nobel Prize in economics. The pair were honored for pioneering work on contract theory. 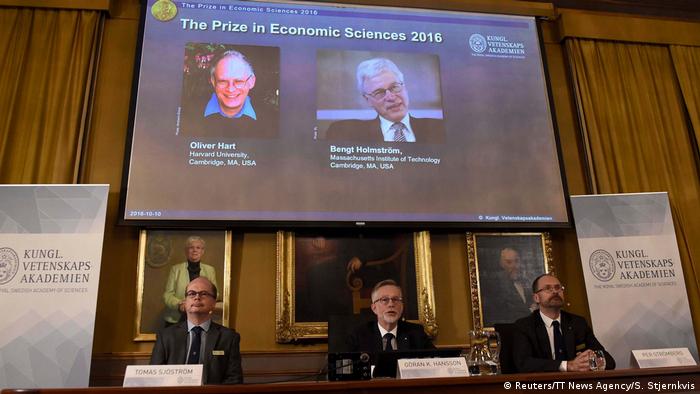 When the Nobel Prize Committee calls

Dutch scientist Ben Feringa was one of three scientists awarded the latest Nobel Prize for Chemistry. In an exclusive interview with DW, he explains how it feels to get that phone call and what it means for his research. (10.10.2016)

Economist and mathematician Reinhard Selten, who made a tremendous contribution to the field of game theory, has passed away at the age of 85. He is the only German to have ever received a Nobel Prize in economics. (01.09.2016)

The pair were named Monday for their pioneering work on contract theory and will be feted in Stockholm at a ceremony in December. Hart is a dual US-UK citizen and economics professor at Harvard University; Holmstrom, originally from Finland, is a professor of economics and management at the Massachusetts Institute of Technology.

"This year's laureates have developed contract theory, a comprehensive framework for analyzing many diverse issues in contractual design, like performance-based pay for top executives, deductibles and co-pays in insurance, and the privatization of public-sector activities," the jury said.

Other names that had circulated included 94-year-old William Baumol, a US labor market specialist,  Indian-born US economist Jagdish Bhagwati, a free-trade researcher, and Paul Romer, the chief economist at the World Bank.

Of the 76 economics prize laureates, US citizens dominate the list overwhelmingly, with 55 winners since the award was first given in 1969. With the exception of economics, the prizes were endowed by Swedish industrialist Alfred Nobel (1833-96), the inventor of dynamite. The economics prize, which was not one of the original prizes mentioned in Nobel's last will and testament, is formally called the Sveriges Riksbank Prize in Economic Sciences in Memory of Alfred Nobel.

Other economists thought to be in the running for the award had been France's Olivier Blanchard, former chief economist at the IMF, and Swedish professor and ex-central banker Lars E.O. Svensson for his work on monetary policy.

"I was dazed, like most prize winners, very surprised and very happy," Holmstrom told reporters on a conference call.

Women remain largely absent from the list of economics laureates with a lone woman chosen in its 47-year history: Elinor Ostrom, in 2009. The economics prize is the fifth of the six Nobel prizes to be announced this year. The award is formally presented in Stockholm on December 10.

Nobel Prize in economics awarded for work on 'natural experiments' 11.10.2021