Authorities in Munich have ramped up security for this year's Oktoberfest. This year a security barricade encircles the venue, surveillance cameras have been installed and large backpacks banned from the tented area. 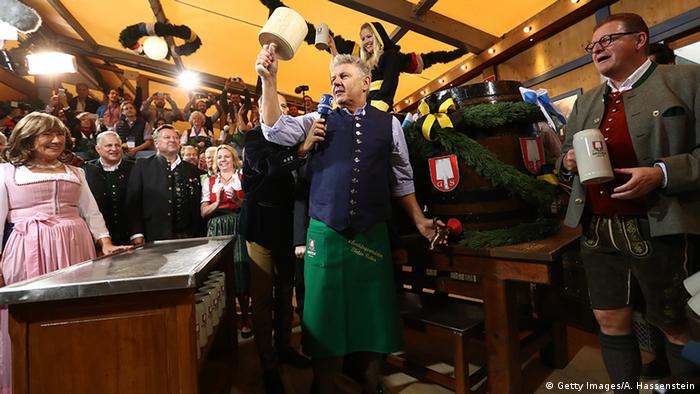 The Oktoberfest got underway Saturday in earnest as Munich Mayor Dieter Reiter ceremoniously tapped the first beer keg at high noon to open one of the world's largest folk and beer festivals.

"Ozapft is!" the mayor exclaimed, which loosely translates from the Bavarian dialect as, "It's tapped!"

There are fears that this year's festival could see fewer visitors. Hoteliers are reporting fewer reservations, there are less tables being booked and authorities in the Bavarian city are increasing security precautions because of fears of an attack on the densely crowded venue.

"We are looking forward to a wonderful and peaceful festival," Oktoberfest's chief organizer Josef Schmid told the DPA news agency.

Security will be a top concern, but the city of Munich is not going to let its festival be ruined, Schmid, a deputy mayor of Munich, added.

"For us, the festival of 2016 is exactly the same as in 2015," which had no serious incidents, Munich's police chief Hubertus Andrä told DPA.

Parade organizer Karl-Heinz Knoll echoed that sentiment: "If we give in to the fears, then it will become impossible to carry out large public events in the future," he said.

Even so, the hospitality industry says bookings have slackened, which has the industry worried. Martin Stürzer, deputy head of the Munich Hotel and Restaurants Association, says bookings are down 10 to 15 percent from last year for an event that usually draws upwards of 6 million visitors to the city.

For the love of beer

For the love of beer

A view from above

That said, this year large backpacks will be banned. Visitors will have to pass through a security barrier screening for weapons and explosives before entering the 30-hectare (75-acre) venue, where the bulk of the drinking and eating is done in traditional Bavarian style.

The Oktoberfest has been targeted in the past. In 1980 a radical right-wing group set off a bomb, killing 13 people. Threats by Islamic militants in 2009 prompted additional precautions, but no serious incidents were reported.

Still, Munich police are worried that a "lone wolf" could strike in a similar fashion as the Tunisian truck driver who plowed into a Bastille Day holiday crowd in the French city of Nice, killing 86 people.

There will be up to 600 police on duty for the Oktoberfest, 100 more than previously. Munich has also hired 450 civilian security guards - nearly double over last year - at a cost of 3.6 million euros ($4 million), according to local press reports.

Still, there are some who ask whether the preparations could backfire. Thomas Böhle, a city administrator, says there are worries that a new mobile barricade could actually make the venue more dangerous in a crisis.

"Is it going to be possible in a developing stress situation to set up a fence in five minutes and - when people are leaving the grounds - to dismantle it again in five minutes?" he asked. "Can the fence then turn into a trap?"

Officials have responded that the fence is meant to prevent overcrowding when 500,000 people are expected to descend on the venue. All this remains to be seen once the beer begins flowing at noon.

The Oktoberfest runs through October 3.