In its yearly report, the OECD concluded that aid donors will have to increase funding for aid programs faster than any other public expenditure in order to fulfill their financial commitments. 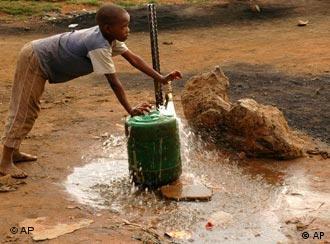 According to the annual report of the Organization for Economic Cooperation and Development (OECD), which was presented in Berlin this week, Germany's contributions in 2005 increased to 0.36 percent of the gross national product from 0.28 percent in 2004.

In 2005, the 22 OECD donor countries contributed almost $107 billion (81 billion euros) in aid. With $10.08 billion, Germany was in absolute figures the fourth largest donor -- after the USA, Japan and the UK. Considering, however, the percentage of the gross domestic product (GDP) that was spent on development aid, Germany ranked 13th.

"Within the EU, France and Germany were for a long time ahead of Great Britain," said chairman of the OECD Development Committee Richard Manning. "Now, all three countries are practically on the same level."

"It would be merely speculation to suggest what the situation will be in several years. In principle, one would expect from Germany, with the size of its economy, to be ahead of the other two, but that would depend on Germany's further economic growth."

Overall aid funding, recently rising by 5 percent per year, would have to rise by 11 every year from 2008 to 2010 in order for donor countries to fulfill their pledge to increase aid to $130 billion and double aid to Africa by 2010. Organization for Economic Cooperation and Development

In order to raise spending to 0.51 percent of its GDP by 2010, Germany would have to increase its spending by more than 50 percent over the next few years.

A breakdown of the OECD's members showed that only a handful of countries -- Denmark, Norway, Sweden, Luxembourg and the Netherlands -- met the United Nations target of donating at least 0.7 percent of their national income to poor nations, and that the average for the developed world was 0.33 percent of GDP.

The report stressed that the effective distribution and use of aid are as important as the volume of contributions. There is a gap of billions of dollars between what donor countries report as aid and what recipients see and control through their own budgets.

According to Manning, however, helping countries means "creating possibilities for generating income."

"That also means investing in other areas -- for example, the creation of an independent judiciary," Manning said.

"It's a question of the media playing a positive role in their cooperation with organizations of civil society as well as creating professional associations and unions. German foundations are leading the way in these fields for other OECD countries that have now started copying these activities," he said. 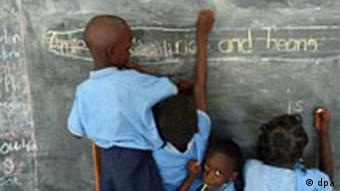 Even though this year's report did not focus on the success of individual activities, progress has been noticed in several areas. Child mortality in some African countries have been significantly reduced over the last five years -- in Tanzania, for example, by 30 percent.

"The number of children who are not attending primary school decreased worldwide from 100 to 77 million in the time span of five years," Manning said. "The trend, I believe, is clear and it shows that comprehensive investments of the international community in the field of primary education have been successful.

"It is still, however, a long way to implementing our ambitious millennium development goals of having all children gain basic education. But I think that we're making progress in this direction."

Berlin sees an improvement of Africa's energy provision as a key to tackling poverty across the continent. The government hopes to use its EU presidency to make advances in this area. (17.12.2006)

"Press Freedom Is the Staple of Democracy"

German President Horst Köhler visited Deutsche Welle in Bonn on Friday. He spoke to DW-RADIO editor-in-chief Miodrag Soric about the challenges Germany and the world are facing today. (08.12.2006)

EU Commission: Africa Is on the Move

The European Commission launched a new development initiative this week in a bid to remind Europeans of Africa's strengths and recent achievements. (19.11.2006)