Obama: US 'intensifying' attacks on IS in Syria

The US is targeting the "heart" of the IS, US President Barack Obama said after a briefing with top military and security officials. After losing ground, the jihadists struck back against Kurdish forces in Syria. 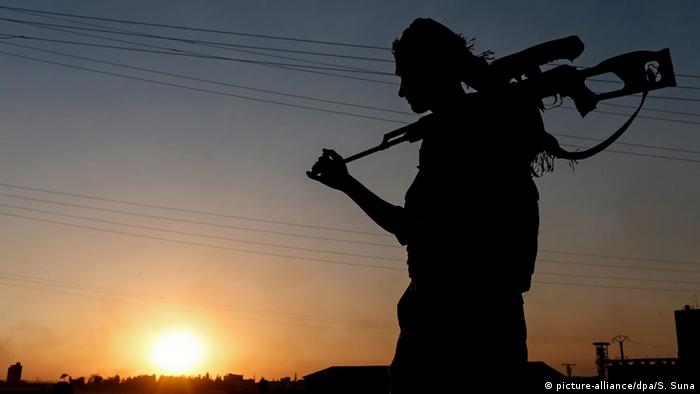 The military campaign against the "Islamic State" (IS) will be long and likely face "setbacks," Obama said at the Pentagon on Monday.

"We're going after the ISIL leadership and infrastructure in Syria, the heart of ISIL that pumps funds and propaganda to people around the world," he said, referring to IS.

"In many places in Syria and Iraq, it's dug in among an innocent civilian population. It will take time to root them out," Obama added, after discussing the efforts to dismantle the extremist group with his national security team and top military brass.

Obama said the US will continue to disrupt the group's efforts to finance itself, and target oil and gas facilities which the jihadists use to fund their operations.

There are no plans to send more American troops overseas, the US president said.

The US-led coalition is conducting airstrikes against the IS in Iraq and Syria, and providing training and equipment to forces fighting the IS on the ground.

"We continue to accelerate the delivery of critical equipment, including anti-tank weapons, to Iraqi security forces," Obama said, adding that the US needs to do more to train and equip moderate rebels in Syria.

"Our efforts to counter violent extremism must not target any one community because of their faith or background, including patriotic Muslim Americans who are our partners in keeping our country safe," he said.

Over the weekend, the US-led coalition bombed the de facto IS capital, Raqqa, conducting some of the heaviest airstrikes in months. The move was aimed at assisting Kurdish forces advancing toward the Syrian city.

On Monday, however, the IS launched a major offensive to regain ground lost to the Kurdish fighters. IS militiamen managed to retake the town of Ain Issa, two weeks after they were pushed back by Kurdish forces. Ain Issa is located some 50 kilometers (30 miles) north of Raqqa.

The IS also recaptured several villages around the mountain of Jabal Abdul-Aziz, some 100 kilometers (60 miles) east, according to the Syrian Observatory for Human Rights.

"The blast was so big it was heard across the city," said the head of the London-based Observatory, Rami Abdel Rahman.

Timeline: the rise of the 'Islamic State'

The self-proclaimed "Islamic State" (IS) is a Sunni Islamist rebel group which controls territory in Iraq and Syria. It is largely financed by income from the oil fields in Syria and Iraq, and private donations, often from the Gulf states Qatar and Saudi Arabia. Here are the most important events, since the declaration of caliphate one year ago. (29.06.2015)

Coalition forces have carried out 16 air strikes on the "Islamic State" in its de facto capital Raqqa in Syria. The operation follows a video posted online showing 25 soldiers being massacred in Palmyra's ancient ruins. (05.07.2015)