In their first call since February, Russian President Vladimir Putin has phoned US President Barack Obama to discuss the Ukraine crisis. Also on the agenda were Iran nuclear talks, "Islamic State" and Syria. 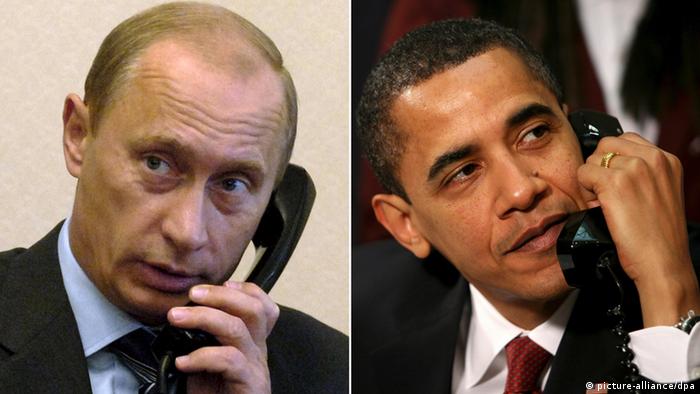 According to the White House, Obama told Putin on Thursday that he needs to live to up to the terms of a ceasefire deal with Ukraine which were agreed in the February Minsk peace deal, "including the removal of all Russian troops and equipment from Ukrainian territory."

In light of the ongoing Ukraine crisis, relations between the Western Allies and Russia have reached their lowest point since the Cold War. Earlier this week, NATO also announced plans to increase its military presence in eastern Europe in response to the conflict.

The West has repeatedly accused the Kremlin of supporting pro-Russian separatist rebels in Ukraine - claims which Putin has consistently denied.

Since the annexation of Crimea in spring last year, some 6,500 people have died in the conflict. Despite hopes of a lasting ceasefire earlier this year, terms agreed by the Ukrainian military and separatist rebels in the Minsk peace deal have been repeatedly breached by both sides.

The White House said on Thursday that the two world leaders also discussed "the increasingly dangerous situation in Syria," and reiterated the importance of continued P5+1 unity during the ongoing negotiations to prevent Iran from acquiring a nuclear weapon."

The phone call between Obama and Putin on Thursday came just a day before US Secretary of State John Kerry was due to fly to the Austrian capital of Vienna to meet with his P5+1 counterparts.

The group hopes to finally sign a deal which would see Tehran accept restrictions designed to prevent it from developing a nuclear weapon, in exchange for a lifting of economic sanctions. With the June 30 deadline approaching, time is running out at the negotiating table.