US President Barack Obama has thanked his Russian counterpart for his role in achieving a nuclear agreement with Iran. Washington says the two leaders also pledged to work to reduce tensions in Syria. 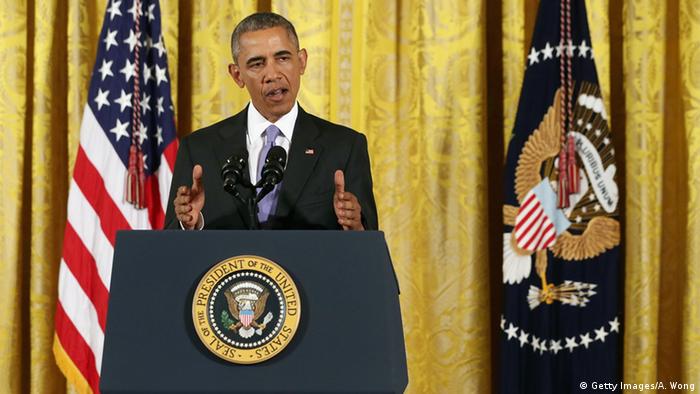 Barack Obama called the Russian President Vladimir Putin on Wednesday and agreed to remain in touch following the nuclear agreement that was signed with Iran a day earlier.

"The President thanked President Putin for Russia's important role in achieving this milestone, the culmination of nearly 20 months of intense negotiations," the White House said in a statement.

Putin and Obama also decided to remain in close contact over the conflict in Syria and "work together to reduce regional tensions," the White House said in its statement.

Moscow was among the representatives of the P5+1 group of countries that participated in the talks to reach an agreement with Iran on its nuclear plants. The P5+1 group includes the United Nations Security Council's five permanent members - France, the US, the UK, China and Russia - plus Germany.

Obama's praise for his Russian counterpart - calling Moscow "a help" - comes as Western powers are having a difficult time with the country, which is believed to be siding with pro-Russian separatists in Ukraine's east. The conflict, which has been going on since last year, has killed more than 6,000 people and prompted the EU and US to impose severe sanctions on Moscow.

"I'll be honest with you. I was not sure given the strong differences we are having with Russia now around Ukraine, whether this would sustain itself," Obama said of Moscow's role in the Tehran talks.

Ashton Carter to travel to Riyadh

Meanwhile, US Defense Secretary Ashton Carter was planning to travel to Saudi Arabia as part of Obama's efforts to convince his allies in the area that the deal represents a victory.

"Secretary of Defense Ashton Carter will be going out to Israel this weekend, and to Saudi Arabia, and he will be continuing our practical cooperation with both Israel and our partners in the Gulf," she added.

Diplomats: 'we sealed a deal' in Iranian nuclear talks

Diplomats on both sides are saying that a formal nuclear deal has been reached between Iran and major world powers. Negotiators have announced a "final" Vienna meeting in the lengthy process for later on Tuesday. (14.07.2015)