US President Barack Obama has drawn the battle lines as his rival Republicans assumed full control in Congress. Obama said he would veto a key Republican bill approving the building of an oil pipeline from Canada. 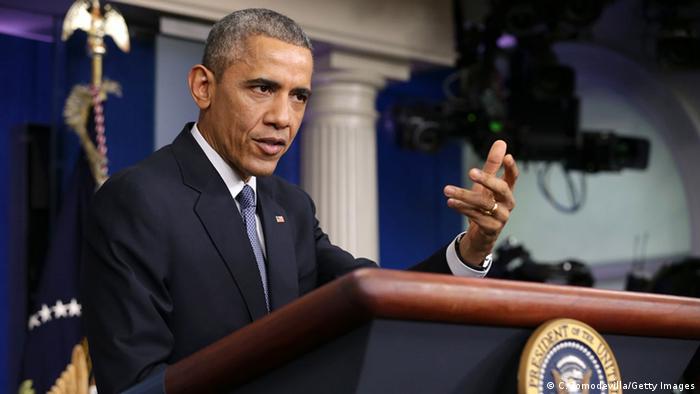 The White House said on Tuesday that Obama would veto the legislation to approve the long-stalled Keystone XL oil pipeline from Alaska, one of the major first tests for the Republicans in their new congress.

The 1,179-mile (1,900-kilometer) pipeline project gas been held up for years by the Obama administration over environmental concerns. It would carry crude oil from Canada's tar sands to oil refineries on the US Gulf Coast. The president has voiced opposition to the project in the past.

White House Press Secretary Josh Earnest outlined a series of concern about the legislation, but added: "I'm not prepared at this point to issue a veto threat related to that specific piece of legislation."

Republicans took control of the Senate and expanded their majority in the House of Representatives in November. In their sights now are Obama's signature healthcare act, immigration legislation that spares millions from the threat of deportation and new regulations governing the environment and business.

With a series of high-profile presidential moves, such as steps to normalize relations with Cuba, Obama has already irritated some Republicans who claim he is acting in a high-handed manner.

The two main sponsors of the Keystone XL bill in the Senate, Joe Manchin, a Democrat, and John Hoeven, a Republican, said they had enough votes to overcome parliamentary delaying tactics on the bill - but not a presidential veto. Hoeven has said he would attach the bill to a broader energy package or to spending bills that Obama would need passed, if it were to be vetoed.

Meanwhile on Tuesday, Republican House of Representatives speaker John Boehner only narrowly staved off a challenge from dissident party members to replace him. A core group of conservatives complained Boehner had done too little to cut spending and fight Obama's immigration and healthcare policies.

US seeks Indonesia alliance against China maritime claims 15m ago