Obama: 'International credibility on the line' over Syria

US President Barack Obama has warned the "international community's credibility is on the line" over its response to alleged chemical attacks in Syria. Russia, meanwhile, has warned against US action without UN assent 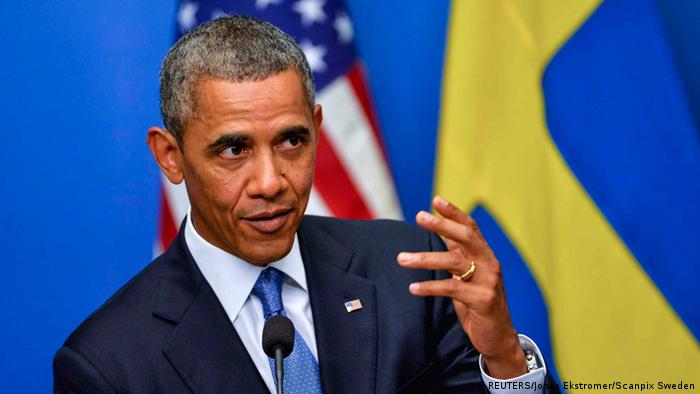 Obama told a press conference in Sweden that the international community had a duty to uphold a ban on the use of chemical weapons, ratified by countries around the world, following their alleged use in a Damascus suburb. The US has laid the blame of the August 21 attacks - which it claims left 1,429 people dead - at the feet of Syrian President Bashar al-Assad's regime.

Obama: 'Credibility on line' over Syria

"America and Congress' credibility is on the line, because we give lip service to the notion that these international norms are important," Obama added. The president had previously described the use of chemical weapons in Syria as a "red line."

Obama is seeking international and domestic support for US-led military intervention in Syria. On Tuesday evening he received backing from rival Republicans and the US Senate Foreign Relations Committee for his draft resolution permitting military action for a period of an initial 60 days, extendable to 90 with congressional approval. The draft includes a provision banning any deployment of US forces on the ground.

The president is to put his intervention plans to a vote in Congress when lawmakers reconvene after a summer break next Monday. He has indicated he is willing to act in the absence of UN Security Council approval.

Russia remains opposed to the United States taking unilateral action on Syria and, as a permanent member of the UN Security Council, has repeatedly resisted efforts to push the UN to take action.

In an interview with Russian state television on Wednesday, Russian President Vladimir Putin warned the United States against an assault on al-Assad's regime without UN assent.

"Only the UN Security Council can give approval for the use of force against another state, Putin said."

For the first time, however, he said he did not rule out Russian support for intervention, if he was provided unequivocal evidence that the Syrian government had used chemical weapons. Asked whether he could foresee Russia backing a UN resolution authorizing force if it was "beyond doubt" the regime was behind the attacks, Putin replied: "I do not exclude that."

The Russian president's comments came ahead of a G-20 meeting to be held in Russia starting Thursday, which is sure to be dominated by discussions on Syria.

France remains the only permanent member of the UN Security Council, alongside the United States, which has expressed its willingness to take part in a US-led intervention. It opened a parliamentary debate into the issue on Wednesday afternoon.

"To not act would be to put in danger peace and security in the entire region. What credibility would our international commitments against non-proliferation of weapons of mass destruction including nuclear weapons stand for," French Prime Minister Jean-Marc Ayrault told parliament.

"What message would this send to other regimes, and I am thinking like you of Iran and North Korea? The message would be clear: You can continue."

Unlike the United Kingdom, France does not need parliamentary support in order for the president to give the go-ahead for limited military action. Last month the UK parliament struck down plans for military involvement put forward by Prime Minister David Cameron.

German Chancellor Angela Merkel, who is facing a general election later this month, has ruled out German military involvement, but vowed to hold talks in St. Petersburg to press for meaningful United Nations action.