The US president has expressed confidence that the 12-nation free trade pact would be ratified in 2016. But he lacks major support among his party's ranks, including Democratic presidential nominee Hillary Clinton. 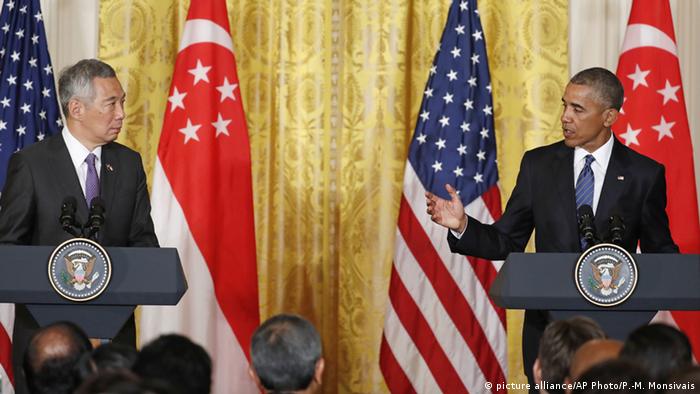 US President Barack Obama on Tuesday defended the benefits of the Trans-Pacific Partnership (TPP) during a joint press conference with Singaporean Prime Minister Lee Hsien Loong.

"We stand together for a regional order where every nation large and small pays and trades by the same rules," Obama said.

The US president expressed confidence that the deal will be approved by Congress later this year, although it faces opposition from within his party, including from Democratic presidential nominee Hillary Clinton.

The pros and cons of the Trans-Pacific Partnership

The Trans-Pacific Partnership, one of the world's biggest multinational trade deals, has been signed by 12 Pacific Rim nations. Economist Gary Hufbauer spoke to DW about the risks and advantages.

"To try to pull-up a drawbridge on trade would only hurt us and hurt our workers. The answer is to make sure that globalization and trade is working for us and not against us," Obama added.

Meanwhile, Lee called on the US Congress to ratify the agreement, saying it marked an "integral component of America's rebalance to Asia."

"Not only will the TPP benefit American workers and businesses, it will send a clear signal and a vital signal that America will continue to lead in the Asia Pacific and enhance the partnerships that link our destinies together," Lee said.

The agreement, which accounts for 40 percent of the globe's economic output and 26 percent of world trade, would effectively dismantle tariff and non-tariff barriers to trade and investment between 12 Pacific Rim nations, including the US and Singapore.

However, critics believe the deal would cut jobs in several countries and weaken labor and environmental standards.

Trade representatives of the TPP's 12 member states signed the trade pact in February. The countries have two years to ratify the agreement, or face returning to the negotiating table.

Singapore's prime minister was on an official visit to the US as the city state and Washington celebrate 50 years of diplomatic relations.