A rare find: The Germanic National Museum is restoring the remains from a Bronze Age chariot burial. It will take years to examine and restore the artifacts before they are presented to the public. 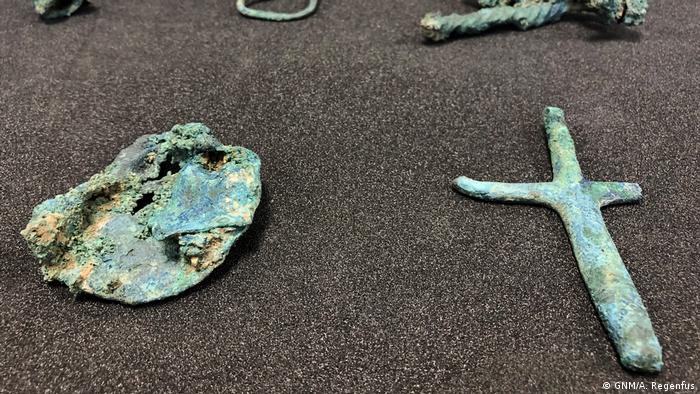 The artifacts from a "chariot burial," a grave where the deceased was buried with his wagon, in the Lower Bavarian market town Essenbach, have been handed to the Germanic National Museum (GNM) in Nuremberg for restoration. They will be displayed in a GNM collection in the future.

Angelika Hofmann, head of the GNM Prehistoric and Early History collection, said the "urn field culture" (1,300 - 800 BC) find was exceptionally rare. "Only the most important personalities were buried like that," she explained, adding that only two chariot burials from that age have been found so far, making the Essenbach find the third. 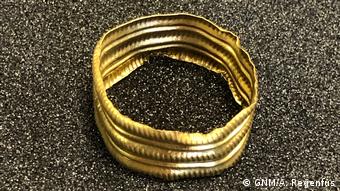 A gold ring found in the grave

It was the grave of a member of the elite "having an economic, political or religious influence." Such an elite "didn't even make up one percent of the population at the time," said Hofmann.

In the municipality of Landshut, construction workers developing a housing estate in 2011 found the grave in which the deceased person had been buried along with a horse's harness and wagon. 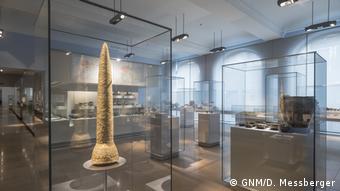 There was not much left, as bodies were cremated in that era: a sword, a gold ring, a razor, ceramic vessels and the bronze fittings of the wagon bear witness to the importance of the dead person. The grave, recognizable as a rectangle marked by discolorations in the soil, measures 2.15 by 1.15 meters.

The chariot burial was part of a larger burial place that holds about 30 urn graves. Archaeologists will now clean, analyze and restore the artifacts — only then will they be shown in the "Bronze Age Elites" section in the museum's permanent exhibition, alongside other treasures like the Golden Cone of Ezelsdorf and the Bronze Helmet of Thronberg.

German archeological treasures from tomb of Celtic princess on show

The princess' jewelry had been hidden for thousands of years, but now they're highlights of an ambitious exhibition in Berlin's Gropius Bau museum. Here's a look back at the milestone discovery from 2010. (18.09.2018)