Number of violent neo-Nazis on the rise in Germany | Germany | News and in-depth reporting from Berlin and beyond | DW | 18.04.2011

As the membership of Germany's main nationalist party, the NPD, shrinks, right-wing extremists are flocking to the Autonomous Nationalists, who refuse to participate in elections and are known for using violence. 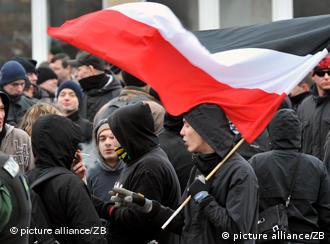 The number of violent right-wing extremists in Germany rose considerably in 2010, according to the country's internal security agency.

"The violent neo-Nazi scene has become stronger," said Heinz Fromm, president of the Federal Office for the Protection of the Constitution, in an interview with the regional daily Neuen Osnabrücker Zeitung.

Fromm's organization is responsible for gathering intelligence on extremist groups that seek to subvert the rule of law in Germany.

Right-wing extremists are split among several factions that cultivate different images in the public sphere and often compete against one another. 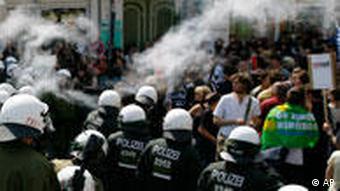 Confrontations between left and right-wing extremists often lead to violence

The National Democratic Party (NPD) participates in regional and national elections and has tried to make inroads with Germany's middle class by focusing on hot-button issues such as immigration, unemployment and social welfare.

With strong roots in the formerly communist and comparatively poor East Germany, the NPD has managed to seat representatives in the regional parliaments of Saxony and Mecklenburg-Western Pomerania.

According Fromm, the NPD's membership declined in 2010.

But as the NPD loses members, the Autonomous Nationalists have grown from 800 to 1,000 people.

In contrast to the NPD, the Autonomous Nationalists reject participation in a political system they view as illegitimate, seeking to implement their political agenda outside of elections.

"The Autonomous Nationalists, who during marches have characterized themselves with violence, continue to gain momentum," Fromm said.

As the more radical and violent Autonomous Nationalists grow, the overall far-right scene has actually sunk by 1,600 to a total number of 25,000 people.

Young people are drawn to far-right party in eastern Germany