Germany's federal prosecutor says two alleged accomplices to NSU member Beate Zschäpe provided the murder weapon that was used in a string of racial killings. The neo-Nazi trial is expected to wrap up in a few months. 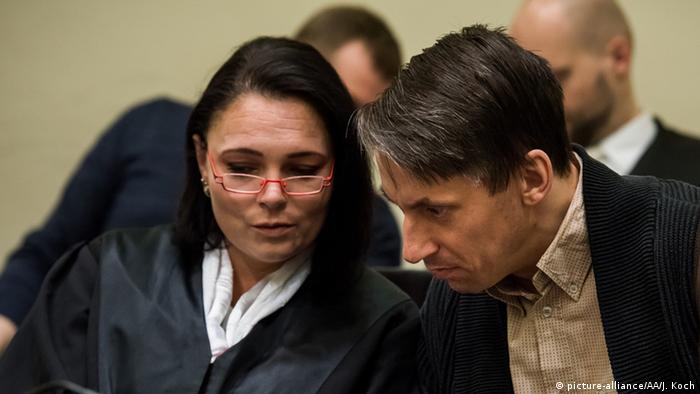 Co-defendant Ralf Wohlleben confers with his lawyer in court

In his closing arguments Monday, public prosecutor Jochen Weingarten said the two co-defendants had aided and abetted the Nationalist Socialist Underground (NSU), a right-wing extremist terrorist gang responsible for 10 murders between 2000 and 2007.

Ralf Wohlleben, a former official at the far-right National Democratic Party (NPD), and Carsten S. stand accused of procuring a Ceska pistol with a silencer that the NSU used to kill eight Turkish immigrants and a Greek citizen. A different weapon was used against their 10th victim, a German policewoman.

Prosecutors said last week that the main surviving suspect, Beate Zschäpe, bears full responsibility for the crimes, even though she did not carry out the killings directly. The fatal shots were allegedly fired by her two friends, fellow NSU members Uwe Mundlos and Uwe Böhnhardt. The pair killed themselves in 2011 when police discovered the group by chance during a botched bank robbery. Zschäpe handed herself in to authorities shortly thereafter.

Prosecutors say the NSU trio operated undetected for a period of 13 years, planning and carrying out attacks on foreigners living in Germany.

There are five defendants, including Zschäpe, in the trial, which has become one of the most closely-watched cases in German history since it began four years ago.

During Monday's closing statements, prosecutor Weingarten said Ralf Wohlleben and Carsten S. would have been aware of the "obvious possibility" that their gun would be used to shoot people with a non-German background. But they provided the weapon nonetheless because they "felt obligated" to the underground terror cell, he said.

Wohlleben denies the charge. Carsten S., however, is the only suspect thus far to have made a confession to police, admitting to selling the gun to the NSU.

Throughout the trial, Zschäpe has denied taking part in the crimes committed by her friends. But prosecutors allege the 43-year-old was closely involved in the NSU's sourcing and stockpiling of weapons, munition, and explosives, and that she had also helped the group acquire identification documents and SIM cards.

The case is being heard before the Munich High Regional Court. The closing arguments of the prosecutors, joint plaintiffs and defendants are only expected to end only after the summer recess, when focus will shift to the remaining co-defendants Andre E. and Holger G. If found guilty, some of the accused could be sentenced to life in prison.

A verdict in the trial, which began in 2013, is expected before the end of the year.

The exhibition "Bloody soil. Scenes of NSU crimes" at the Martin-Gropius-Bau in Berlin features the locations of right-wing murders. DW spoke with photographer Regina Schmeken and found out how the project impacted her. (28.07.2017)