Women’s rights in Afghanistan are under threat, especially as foreign troops prepare to leave. Expert Humaira Rasuli demands the improvement of the situation be a precondition for future aid to Kabul. 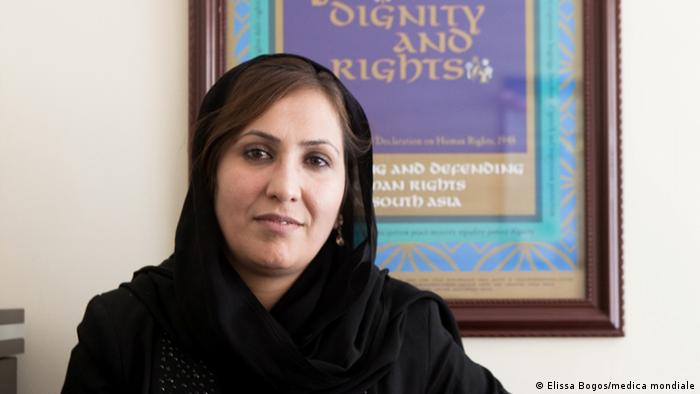 NATO troops are set to withdraw from Afghanistan by the end of this year. One of the main reasons given for the US-led invasion in 2001 was the protection of Afghan women's rights. How have these rights developed so far?

Since the fall of the Taliban regime, Afghan women's rights have expanded significantly. Under the constitution, gender equality is protected and women are free to seek education and work. Today we have women serving in different positions in the government, ranging from ministers to police officers. There are also many women running their own businesses and millions of girls are back in school.

Moreover, rape has been criminalized for the first time under the Elimination of Violence against Women Decree (EVAW). There are a lot of achievements that we are proud of, but unfortunately these gains are not sustainable and they are still contested every day.

What are the main issues faced by Afghan women today?

There is no clear idea of what will happen to women's rights after 2014, as it is still unclear who will form the next government and whether the national security forces will be able to protect the country. Everyday women become more and more scared and concerned because not only are the troops withdrawing, but also the funds are diminishing, leading to a lack of jobs.

For Afghan interpreter, education came at a price

Freshta Caron risked her life to go to school and then to work as an interpreter in Afghanistan, even as the Taliban killed her friends. Now a student, she's got her sights set on her war-torn country's highest office. (19.03.2014)

Now that President Karzai's brother Qayyum has withdrawn from the race, three candidates have emerged as favorites for April's presidential elections in Afghanistan. Observers are hoping for a fair and peaceful outcome. (13.03.2014)

The Taliban attack on a military base on the border to Pakistan raises some questions. How could the attackers surprise the Afghan soldiers and why wasn't there any NATO air support? (26.02.2014)

The Afghan government has been seeking talks with the Taliban to come to a so-called 'political solution.' But the Taliban have denied taking part in any negotiations. Observers say it is due to pressure from Pakistan. (20.02.2014)

The situation is very complicated and we are not only concerned over a possible return of the Taliban and the growth of conservatism in society. We are also worried about the lack of rule of law, good governance and economic opportunities in the country. We are not that hopeful of continuing our achievements.

How do you feel about these developments?

Nobody can predict what will happen. It depends on the new government and on the responsibility of the international community. Germany is expected to reduce its troops, but it will also expand its civil development support, which is something we welcome.

Our achievements have only been possible with the support from international community. We now want it to intervene and pressurize the Afghan government to ensure Kabul's commitment to international law and conventions. If the international community sets conditions and continues to explicitly defend the equal rights of women, it will be like a dream coming true for Afghan civil society.

Germany's new development strategy for Afghanistan contains conditions for financial help. However, no separate condition was set for women's rights. The issue is only mentioned as a factor of good governance, but is this enough?

We were expecting gender equality and women's rights to be cross-cutting issues in the strategy and a separate thematic area. It is a part of good governance and therefore highlights democratization and the improvement of women's rights. However, we expected more.

Another concern is that most of the international donors are planning to spend 80 percent of their funds through the Afghan government. This is worrisome, because the Afghan national priority program is not covering all of the issues the civil society is working on, especially women's rights.

2014 is set to be a crucial year for the Afghan people, as the presidential elections are set to be held on April 5. What do you expect from the new government?

It will not be an easy year, but we are optimistic. Many think that the presidential elections will be a fundamental step towards the future, but we have so far not seen any specific strategies by the candidates. There is not much trust, that a new president will bring change.

We as a civil society organization do not focus on who will run the government, but our priority is human rights, which have to be respected in the legal framework and also in the society. Regarding the withdrawal of the troops, we hope that the Bilateral Security Agreement with the United States will be signed soon, because it gives us reassurance that the international community will extend their support.

Humaira Rasuli is the director of Medica Afghanistan, a rights organization which supports traumatized women and girls, who have been victims of sexualized crime. The organization gives women legal advice, psychosocial health care and does lobby work on women's issues.