More than 1,000 people have taken part in a peace vigil in Oslo in a show of solidarity with the Jewish community. This came a week after a Muslim gunman killed two people, including a Jewish guard in Denmark. 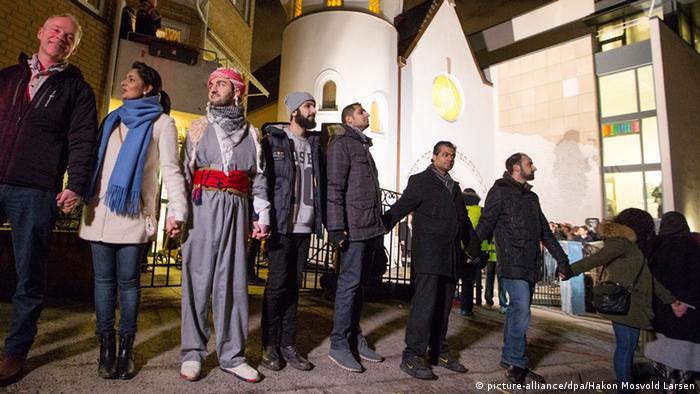 Norwegian Muslims were among those taking part in the vigil on Saturday evening, in which they joined hands with Norwegian Jews and others to form a symbolic protective ring around the Norwegian capital's main synagogue, as the small, mainly elderly congregation filed out after Shabbat prayers.

"No to anti-Semitism, no to Islamophobia," the crowd, which police estimated to number around 1,300, chanted.

"It is unique that Muslims stand to this degree against anti-Semitism and that fills us with hope... particularly as it's a grassroots movement of young Muslims," the head of Norway's Jewish community organization Ervin Kohn told the AFP news agency. "Working against fear alone is difficult and it is good that we are so many here together today."

Around a dozen Muslims joined hands in front of the synagogue door.

One of the organizers, Zeeshan Abdullah, said the vigil was to demonstrate that "humanity is one."

"There are many more peace mongers than warmongers," Abdullah said. "There's still hope for humanity, for peace and love, across religious differences and backgrounds."

Several Muslim speakers who spoke at the gathering stressed that Islam was religion of peace and had nothing to do with terrorism.

"We want to show our support to the Jews after what happened in Copenhagen," a Muslim student of Somali origin told AFP, referring to attacks in the Danish capital last weekend in which a radicalized Muslim gunman shot dead two people including a Jewish security guard outside a synagogue.

The gunman, named as 22-year-old Omar El-Hussein, was born in Denmark of Palestinian parentage, and is said to have become radicalized while serving a two-year-jail term.

This was just the latest in a series of attacks carried out by jihadists in Europe over the past several weeks, including those on the French satirical paper Charlie Hebdo and a kosher grocery store in Paris last month, which killed 17 people.

Hundreds of people have attended the funeral for a gunman police say shot two people dead in a series of attacks in Copenhagen last week. The assaults have again sparked debate over European multiculturalism. (20.02.2015)

Tunisia: Youths clash with police over economic woes 11m ago