Philip Manshaus was found guilty of terrorism and murdering his adopted stepsister from China. Showing no regret, the 22 year-old said he "wished he had done more damage." 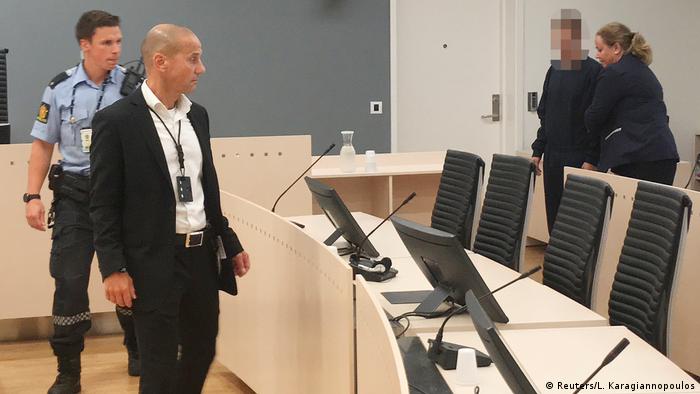 A Norwegian court on Thursday found a man guilty of killing his stepsister and attacking a mosque in Oslo. The sentence of 21 years preventive detention is the longest allowed jail term under Norwegian law.

Prosecutor Johan Oeverberg said the 22 year-old defendant had "proven to be an extremely dangerous person."

Philip Manshaus was charged with terrorism for opening fire at the Al-Noor Islamic Centre on August 10.

He was also charged with shooting dead his 17-year-old stepsister Johanne Ihle-Hansen in the family home shortly before the mosque attack. Police said there was a racist motive to the murder. Ihle-Hansen was adopted from China when she was two years old. Her adoptive mother later married Manshaus's father.

Manshaus pleaded not guilty to the terror and murder charges against him, but admitted the facts of the case are true.

Journalists and spectators had to watch the trial by video link due to the ongoing coronavirus pandemic.

At one point, Manshaus reportedly exploded into a tirade of anti-Semitism and homophobia.

In his concluding remarks, the attacker said he expected to be convicted and given a long sentence, "but I would like to point out to the judges that they are accomplices to the ongoing genocide of the European people."

Appearing in court on Thursday, Manshaus told Judge Annika Lindstrom he was invoking "emergency justice"  — a defence in Norway that says a person had no choice but to commit a crime, and so cannot be punished.

The 22-year-old said during the trial that he did not regret his actions, which were in "self-defense."

In May, Manshaus' lawyer noted in her closing statement that the court could instead order him into mandatory psychiatric care.

Thirty witnesses spoke at the trial in total. Manshaus' father testified, as did the adoptive mother of the deceased victim.

Armed with a hunting rifle and a shotgun, Manshaus entered the Al-Noor Islamic Centre Mosque on August 10 last year.

According to the mosque director, Manshaus had gone into the building wearing a helmet and body armour. He was overpowered after a struggle with two members of the mosque. Several shots were fired but no one was shot or seriously injured inside the mosque.

Retired Pakistani air force officer Mohammad Rafiq had seized Manshaus, pinned him down and took his weapons from him.

Manshaus has testified that he was inspired by Australian Brenton Tarrant, who has pleaded guilty to the 2019 mass shootings at two mosques in Christchurch, New Zealand. Fifty-one people were killed in the attacks.

Manshaus said he wished he had "planned the attack better," but said he was "proud to have had the opportunity to fight."

Norwegian police have concluded that Manshaus acted alone in the attack.

The 21-year-old man is suspected of opening fire in a mosque and breaching anti-terror laws. He has pleaded not guilty and refused to be interrogated by authorities. (12.08.2019)