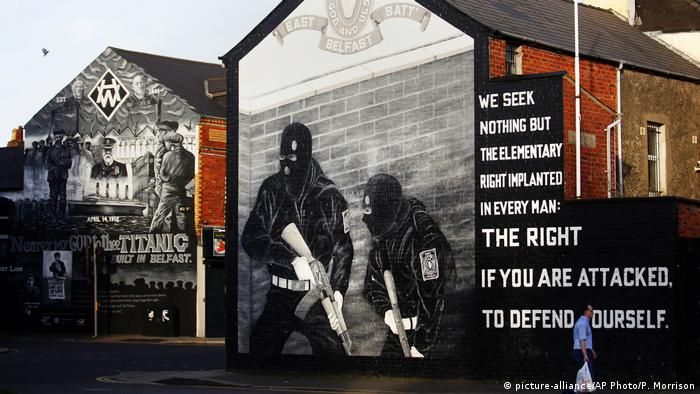 Loyalist paramilitary organizations in Northern Ireland were on Thursday reported to have told London they are temporarily withdrawing support for the 1998 peace agreement, often called the Good Friday Agreement.

The decision was taken amid concerns over the UK's Brexit deal with the European Union, Northern Irish newspaper the Belfast Telegraph reported.

A letter from an umbrella body representing loyalist groups said its opposition was because of the Northern Irish Protocol  — part of the Brexit divorce deal. They oppose the additional checks and paperwork for goods moving between Great Britain and Northern Ireland — implemented to prevent the need for a hard border on the island of Ireland.

What did the letter say?

However, it will raise fears about the future of the loyalist ceasefire.

The letter, from the Loyalist Communities Council, claimed that the basis on which the paramilitaries committed to end violence in the 1990s had been undermined.

"We are concerned about the disruption to trade and commerce between Northern Ireland and the rest of the United Kingdom that is occurring," said the letter, written by David Campbell, chairman of the Loyalist Communities Council.

Since Brexit took effect on January 1, 2020, Northern Ireland — which effectively remains part of the EU Single Market — has had problems importing a range of goods from Britain.

Supporters of Northern Ireland being a part of the UK, known as loyalists or unionists, say this divides the United Kingdom and is unacceptable as a result.

"Please do not under-estimate the strength of feeling on this issue right across the unionist family," the letter warned.

Prior to the Brexit accords being struck, and when the Conservatives still relied on votes from the unionist DUP to govern, Johnson famously assured unionists in Northern Ireland that checks in the Irish Sea were out of the question.

Deal that ended decades of violence

The DUP head of Northern Ireland's government, First Minister Arlene Foster, last month called for the special Brexit rules for the Irish border to be scrapped.

Foster said the protocol, designed to keep the Irish border open, amounted to "an incredible act of hostility."

The 1998 peace deal, known as the Belfast or Good Friday Agreement, ended decades of violence between nationalist and loyalist paramilitaries.

Nationalist groups had conducted a campaign of violence aimed at bringing about a united Ireland while mainly Protestant loyalist groups fought to maintain Northern Ireland's union with Britain.