Northern Thais make up Prime Minister Yingluck Shinawatra's core support base. But people are becoming disenchanted with her government over issues of corruption and a botched rice price-fixing scheme. 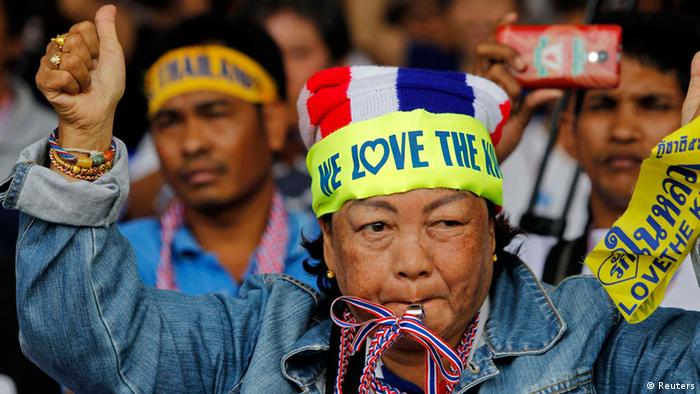 Even after almost four months of relentless and increasingly violent protests against her government, many people from Thailand's northeastern region, known as Isaan, still admire caretaker Prime Minister Yingluck Shinawatra's poise and determination. They also praise her brother and former premier Thaksin for paying attention a decade ago to their needs such as affordable health care and village development funds.

However, a large number of Bangkok residents with Isaan roots - who previously supported Thaksin - say they are becoming increasingly impatient with Yingluck and her ministers. Many are blaming her government for the disastrous policy of promising and failing to pay more than a million farmers fixed prices for rice above world market levels.

Angry farmers had threatened to drive hundreds of tractors on Friday, February 21 to demand payment. However, the protest was canceled at the last minute after farmers struck a deal with the prime minister, who agreed to make long-delayed payments on last year's rice crops by next week. The farmers vowed, nonetheless, to stage a protest next week if the payments are not made, according to media reports. 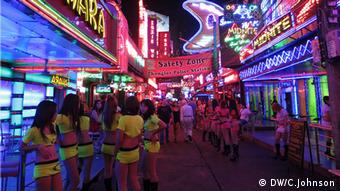 "Risa", a waitress on the Soi Cowboy go-go strip bar, says she can't help becoming influenced by the speakers attacking Thaksin and Yingluck every night on a nearby stage at Asoke intersection, one of several protest sites across this expanding metropolis of 14 million.

"As a woman, I don't like it when they insult Yingluck," says Risa, 40, who migrated to Bangkok from Si Saket two decades ago to give her son better educational and career opportunities. "But I am also disappointed at Yingluck and the government. They are cheating too much, and they are hurting both farmers and poor people like us."

'Politics is hurting the economy'

Like many others, she says she no longer trusts Yingluck and Thaksin. But she says she dislikes Democrat Party leader Abhisit Vejjajiva and protest leader Suthep Thaugsuban, often blamed for ordering a crackdown on Red Shirt protesters which left more than 90 dead and hundreds injured in 2010.

Thailand: A country without a government

Since the February 2 elections, Thailand's interim premier has lacked the authority to rule the Southeast Asian country. Four people have recently died in riots. The government is running out of options. (18.02.2014)

Protesters in Thailand have vowed to press on with rallies, setting the stage for the continuation of a dispute mainly pitting dissenters in Bangkok and southern Thailand against Pheu Thai supporters in the north. (06.02.2014)

"I don't know who can run the government. I only want to see peace and harmony. Politics is hurting the economy, especially at bars on Soi Cowboy. Thailand has to change." Risa's views are shared by many among the millions of Isaan natives who migrated to the capital amid droughts in the 1980s. Their views matter, since they've been on the "winning side" of every election since 2001.

While protest sites in Bangkok are dominated by southern Thais and Bangkok-born academics and entertainers, small numbers of northeastern Thais also sit on the grimy streets and blow whistles to show their frustration with the government.

'We want a better government'

"Malee", a street-food vendor who moved to eastern Bangkok from Khon Kaen, says she doesn't support either the royalist Yellow or northern-based Red-Shirts. She wants the government, comprised mainly of her fellow northerners, to step down over issues of corruption, especially in the disastrous rice-price scheme. "We don't want a military coup, and we don't want Suthep or Abhisit to retake power. We want reform and a better government," she says.

"Ben", a dental assistant originally from Ubon Ratchathani on the Thai-Lao-Cambodian border, says it's no longer true that Isaan voters will automatically support Thaksin. 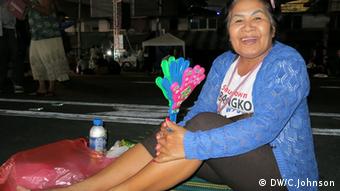 "We are Thai people too and we love the King. We don't like when Red Shirts insult the monarchy or cause violence. I don't like Suthep, but I am here at this protest because I want to do something for our future."

Thailand's anti-corruption agency said this week that they'll call Yingluck in for questioning on February 27 over her role in alleged corruption and misuse of funds in the rice price-fixing scheme. Many observers suggest that this could result in charges, jail time and either government collapse or paralysis.

Yingluck, who has made scant public appearances since the controversial and incomplete snap election on February 2, posted a message on her Facebook wall on February 20, saying that she is innocent and will cooperate with the National Anti-Corruption Commission. 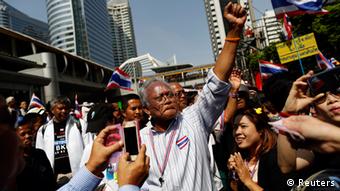 The Constitutional Court also ruled that her government must curtail efforts to disperse protesters after four protesters and one police officer died in clashes involving grenades and gunshots. Thai media reports list 16 dead, at least 689 injured in the political conflict since November 30.

But those numbers could rise if Yingluck's Red Shirt supporters join the fray. According to Reuters news agency, they plan a rally in Nakhon Ratchasima on February 23. "We are not saying that we want to come out and fight, but it seems that Suthep is challenging us Red Shirts to come out and face off," spokesman Thanawut Wichaidit said. "Let them come," opposition protest leader Suthep in Bangkok replied. "Do they dare?"