The Social Democrat-led government is to eventually be headed by the country's first ethnic Albanian prime minister, according to the coalition agreement. Zaev's return ends a months-long leadership void. 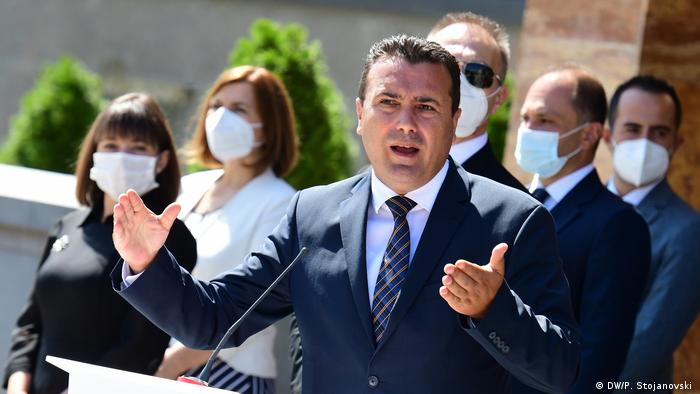 North Macedonia's parliament approved a new coalition government led by the Social Democrats (SDSM) on Sunday, ending months of a leadership void in the country.

"A period of order, justice and discipline is coming, it is time for vetting of the judiciary and unselective rule of law," said Zoran Zaev, who will return to power as prime minister. He had previously held the position from 2017 to 2020. His coalition with the Democratic Union for Integrations (DUI), the largest party representing an ethnic Albanian minority, was voted to power in a 62-51 vote.

As per the terms of the power-sharing deal, Zaev will hand over power to a chosen member of the DUI 100 days before the end of the term, in 2024. This would be the first time a member of the largest minority ethnic community will hold the position, since the country's split from the former Yugoslav federation in 1991.

The vote ends a period of eight months in which North Macedonia was run by a weak technical government, which was only supposed to be in power until April, when a snap election was initially scheduled.

The vote was then delayed until July because of the coronavirus pandemic, leaving the Balkan state without sturdy leadership as the virus took its toll. The virus has so far infected about 14,000 and killed nearly 600 in the country.

During the parliamentary debate, the right-wing opposition accused the Social Democrats of corruption and mismanaging the pandemic and economy. They also accused Zaev's camp of sacrificing the country's national identity in a historic agreement with Greece.

The July election was the first since Zaev's party added "North" to its name early last year in exchange for Greece's promise to stop blocking its path to EU membership. Athens claimed exclusive rights to the name Macedonia for its own province.

The accord ushered the country into NATO and helped secure its status as an EU candidate country. But it deepened fault lines in the polarised society, angering critics on the right.

Zaev's new cabinet has only 19 members, seven fewer than before. Nine ministers from the previous government have positions in the new cabinet.

The new government will focus on dealing with the effects of the pandemic as well as the nation's economy. The prime minister also announced €1 billion ($1.2 billion) in new foreign investment, a 40% increase in the minimum wage and pensions and a planned judiciary reform.

Macedonia-Greece name deal: What happens next?

A strong majority in Macedonia has voted to change the country's name, but low turnout has undermined the result. Prime Minister Zoran Zaev is resolved to go ahead with the change regardless. What are the next steps?