North Korean defector pushes for diplomacy in US testimony

An ex-North Korean diplomat has told US lawmakers to send information to the reclusive country instead of bombs. Thae Yong-ho warned that any military strike would be met with immediate retaliation. 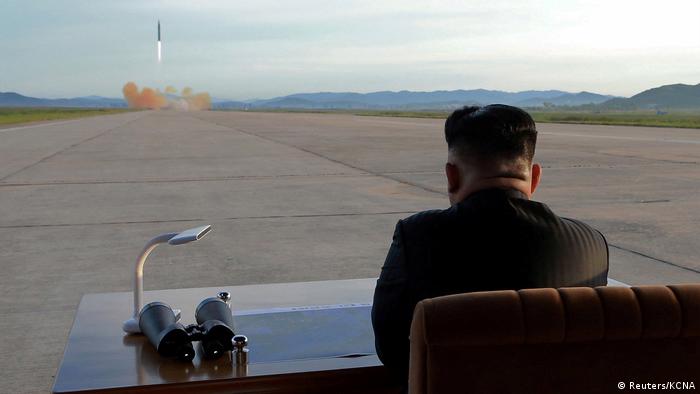 A rare high-ranking North Korean defector told the US Congress on Wednesday that any military strike against Pyongyang would result in automatic retaliation.

Thae Yong-ho, who was chief of mission at North Korea's UK embassy until he defected in 2016, told lawmakers that spreading more information to the isolated country would be far more effective in resolving the long-standing diplomatic crisis that has intensified under the administration of President Donald Trump.

"We can educate (the) North Korean population to stand up by disseminating outside information," Thae said.

"The US is spending billions of dollars to cope with the military threat and yet how much does the US spend each year on information activities involving North Korea in a year? Unfortunately, it may be a tiny fraction."

Thae told the House of Representatives Foreign Affairs Committee that North Korean leader Kim Jong Un thinks he can force the US to accept Pyongyang as a nuclear power and force the withdrawal of troops from the Korean peninsula.

The defector said that officials from Washington should pursue a diplomatic course that convinces Kim he is risking complete destruction of his country.

Although Trump has regularly dismissed such talks as useless, Reuters news agency reported on Tuesday that the US government was quietly engaging in direct diplomacy with Pyongyang.

President Trump is due to start a 12-day, five-country tour of Asia on Friday. The escalating war of words with Kim is expected to be a major topic of discussion during his stop in South Korea.

Why Donald Trump's tweets puzzle North Korea and box in US

The US and South Korea are conducting joint war games while diplomats discuss what to do about Pyongyang's nuclear program. Thus far, Donald Trump's behavior has made Washington's North Korea policy hard to decipher. (18.10.2017)

Ahead of a visit to Seoul, Jens Stoltenberg has urged UN members to implement sanctions against North Korea. Meanwhile, China and South Korea are to work together to persuade the North to give up its nuclear program. (01.11.2017)