North Korea warns of pre-emptive 'blitzkrieg strike' against the South

North Korea has threatened to launch an indiscriminate "pre-emptive nuclear strike of justice" against Washington and Seoul. The warning came as the US and South Korea carried out their largest-ever joint landing drill. 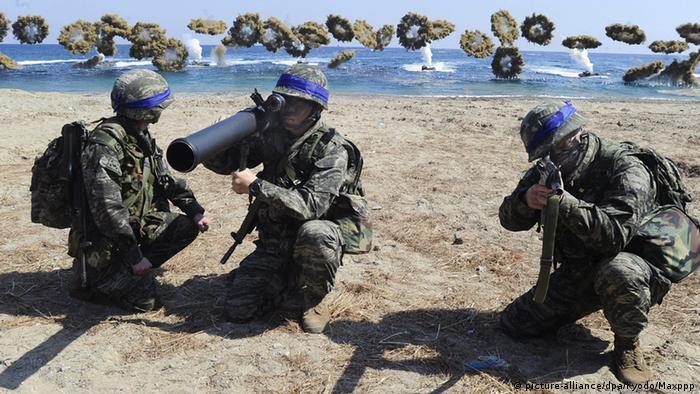 North Korea's military said it was ready to carry out an "ultra-precision blitzkrieg strike" on enemy targets participating in military drills on the Korean peninsula, according to a statement carried by state media on Saturday.

The threats were issued as South Korea and the US launched the "Ssangyong" (twin dragons) amphibious landing exercise. The drill involved 17,200 soldiers - 12,200 US troops and 5,000 from South Korea - and the storming of simulated North Korean beach defenses. The activities along the South's eastern coast are part of eight weeks of joint exercises between the allies.

Washington and Seoul say the drills are defensive and routine, but the North has denounced them as preparations for an invasion, and warned it had the right to launch a "pre-emptive nuclear attack." Such a strike is highly unlikely, however, and analysts believe the threat aims only to display government strength to the North Korean public ahead of a major ruling party convention in May.

In response to the statements, South Korea's Defense Ministry chastised the North for its provocations and "rash behavior." Tension on the Korean peninsula has been high since Pyongyang conducted a nuclear test in January and a long-range rocket launch last month.

Meanwhile, a North Korean submarine reportedly went missing earlier this week, sparking a search by the state's navy. Broadcaster CNN said the US military had been observing the submarine before it disappeared off the North's eastern coast.

US authorities aren't sure whether the missing vessel is adrift or has sunk, CNN reported.

The North has said it is developing submarine-launched ballistic missiles, although experts have questioned the extent of Pyongyang's progress in this area. North Korean leader Kim Jong Un has also said his country had miniaturized nuclear warheads to mount on ballistic missiles. Doubts have been raised about that claim as well.

The KCNA news agency said North Korean leader Kim Jong Un had called for an improvement in the country's nuclear attack capability. He ordered more tests after watching the launch of two short-range missiles on Thursday. (11.03.2016)

Seoul has said it will sanction new individuals and organizations in response to Pyongyang's recent actions. The announcement comes a day after the US and South Korea began their largest military exercise in history. (08.03.2016)