A retired US basketball star has disclosed to the world that North Korean leader Kim Jong Un has a daughter. On Monday, Kim presided over a mass parade to celebrate 65 years since North Korea’s founding. 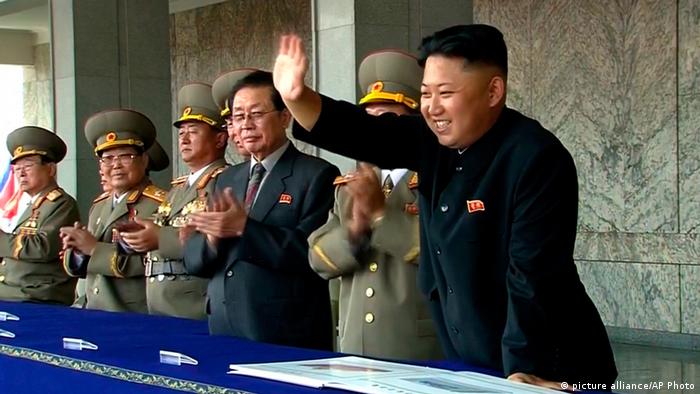 Retired NBA star Dennis Rodman shared the news with the UK newspaper The Guardian in an interview at the end his visit to North Korea last week. In the interview, Rodman, known as The Worm during his colorful basketball career, described Kim as a "good dad" and a "great guy." This was the retired player's second visit to North Korea this year, and he could return to the country as soon as December.

"The Marshal Kim and I had a relaxing time by the sea with his family," Rodman, a two-time all star, told the newspaper.

"We shared many meals and drinks, where we discussed our plans to play a historic friendship basketball game between North Korea and the US, as well as ways to develop their basketball team."

Known for his five-month marriage to the model Carmen Elektra, as well as for briefly having dated Madonna, Rodman added, "I held their baby Ju Ae and spoke with Ms. Ri (Kim's wife) as well."

Based on photographs, media had speculated last year as to whether Ri Sol Ju might have been with child, though the government released no official word. Kim's marriage to Ri also came as a bit of a surprise, with his regime eventually announcing the nuptials last summer, but giving few specifics other than his bride's name.

The leader's own age isn't even public, though he is believed to be about 30 years old. He took charge of North Korea when his father, Kim Jong Il, died in 2011.

On Monday, the country celebrated 65 years since the founding of the Democratic People's Republic of Korea, its formal name. The Worker-Peasant Red Guard, a civilian militia with about 3 million members, led a parade through teh capital, Pyongyang.

Thousands of guards gathered in Kim Il Sung square - dedicated to the current leader's grandfather - with hundreds of thousands more civilians in the background carrying brightly colored flowers in the pattern of a giant national flag.

After agreeing to reopen the joint Kaesong industrial complex and to talk on reuniting families separated by the war, North and South Korea seem to be improving ties. But experts warn that appearances can be deceptive. (22.08.2013)

Though the leader himself did not speak, his prime minister, Pak Pong Ju, said, "Our republic will flourish under the great and glorious leadership of comrade Kim Jong Un."

In July, the country had commemorated the 60th anniversary of the end of the Korean War, displaying plenty of military hardware. Monday's event only showed off a few rocket launchers among the goose-stepping formations of militia men and women, instead focusing on wave after wave of patriotic floats, giant portraits of regime figures, and flag- and flower-waving civilians.