North Charleston police chief: 'I was sickened by what I saw'

Protesters have interrupted an official press conference on the police shooting of an unarmed black man in South Carolina. The officer who carried out the fatal shooting has been charged with murder. 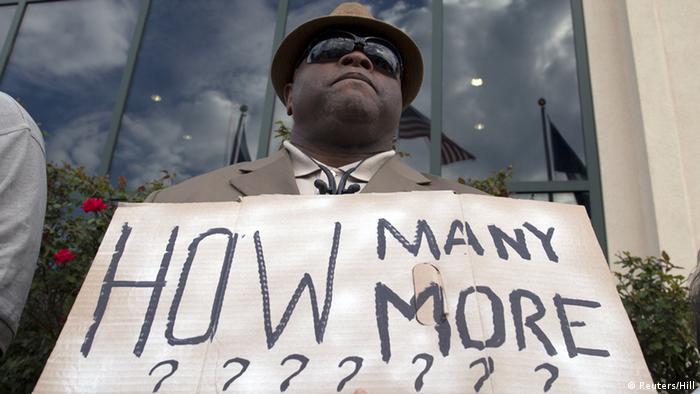 Protesters interrupted an official press conference on Wednesday held in the aftermath of the fatal shooting of an unarmed black man by a white police officer in South Carolina.

Walter Scott, 50, was repeatedly shot in the back in the city of North Charleston on Saturday after a scuffle broke out when he was stopped for a broken tail light on his car.

A member of the public filmed the incident, which shows Scott being shot up to eight times as he tried to run from the scene. He can be seen falling on the last shot and being handcuffed as he lay on the ground fatally wounded.

South Carolina state police arrested the officer, 33-year-old Michael Thomas Slager, and he was charged with murder on Tuesday. He had claimed he shot the victim in self defense.

His dismissal from the force was confirmed by Mayor Keith Summey during an emotionally charged joint press conference with local police chief Eddie Driggers on Wednesday.

Anger and sorrow in North Charleston 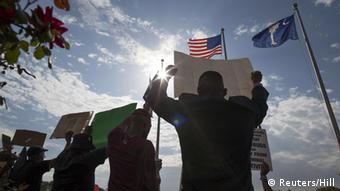 A group of protesters gathered outside the North Charleston city hall and briefly blocked traffic on Wednesday morning, chanting and holding signs with slogans including: "Stop racist police terror."

The press conference held later that day was also interrupted by activists who shouted, "No peace, no justice" several times.

He also said the city would continue to cover healthcare for Slager's pregnant wife until after the birth of their child.

Summey announced that every officer in the city would eventually have a body camera.

When asked by reporters if he had seen the video of the shooting, police chief Eddie Driggers said, "Honesty comes from my heart, I have watched the police video and I was sickened by what I saw."

"I have not watched it since," he added.

He said he saw a police officer remove the victim's shirt and perform "some sort of life saving."

The victim's father, also named Walter, said the family was "devastated" by his son's death, but was grateful that the video evidence had surfaced to show the police officer's role in the killing.

"The way he was shooting that gun, it looked like he was trying to kill a deer or something running through the woods. I don't know whether it was racial or something wrong with his head or what," the father told NBC's Today Show.

His father also said Scott may have fled because "he owed some child support and I believe he didn't want to go to jail again and he ran away."

Police killings of unarmed black men in recent months have sparked violent protests across the US with demonstrators alleging institutionalized racism in the nation's police force.