In an exclusive interview with DW, Nobel Prize winner Harald zur Hausen talks about cancer-causing viruses and his incomprehension towards vaccination scpeticism. 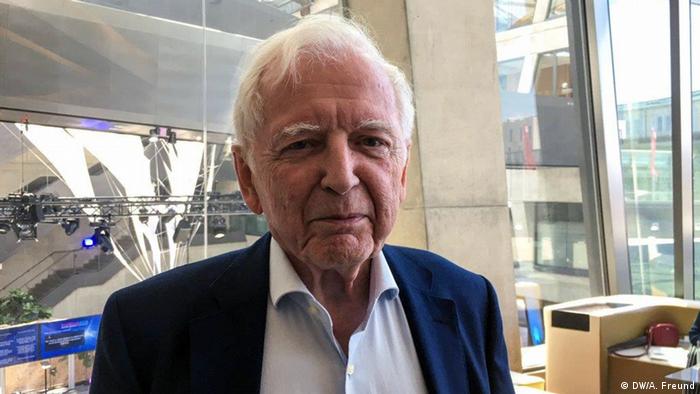 It is well known that smoking, a poor diet and a lack of exercise greatly increase the risk of getting cancer. However, few people know that several cancers are caused by viruses or bacteria and that one can protect oneself against them with vaccinations.

Professor Harald zur Hausen has demonstrated the connection between the human papillomavirus (HPV) and cervical cancer, and thus laid the foundation for the development of the HPV vaccine. For his work in the field, he was awarded the Nobel Prize in Physiology or Medicine in 2008. He presented his latest research at the "Curious2018" science conference, sponsored by the pharmaceutical company Merck.

In an exclusive interview with DW, Nobel Prize winner Harald zur Hausen talks about cancer-causing viruses and his incomprehension towards vaccination scepticism.

DW: Professor zur Hausen, according to current research, how often is cancer caused by viruses or bacteria?

About one third are caused by bacteria, for example, Helicobacter pylori, which plays a major role in gastric cancer, and a small proportion - slightly less than one percent - by parasites, especially by worm infections. Worldwide, just over 20 percent of global cancers have something to do with infection. However, we assume that this number will increase in the future.

Are infections the main risk factors for carcinogenesis?

Are you confident that vaccines will soon be found for other cancers?

There is hope in any case! We are essentially investigating the extent to which colon cancer and breast cancer - two of the most common human cancers - and prostate cancer also, have something to do with infections. In the meantime, it is becoming apparent that these cancers also offer additional possibilities.

If that were to be correct, we can assume that just over 50 percent of cancer cases worldwide have something to do with infections, in other words: Infections are slowly turning out to be one of the main carcinogenic risk factors.

Do the vaccinations only have a preventive effect, or do they also help people who are already ill?

This very much depends: the vaccination against hepatitis B and the papillomavirus vaccination currently have a preventive effect, which means that they must be administered before the infection.

However, there are some carcinogenic infections that can also be treated therapeutically. For example, a hepatitis C infection, caused by virus that is also involved in liver cancer - more often in Europe than in Southeast Asian countries, where therapies have now been developed that significantly reduce the risk of cancer.

The vaccine against cervical cancer has been available since 2006, but it should be noted that many girls and young women have not been vaccinated, especially in Germany. The same phenomenon can be observed in other infectious diseases, such as measles or diphtheria. How do you explain this vaccine fatigue or scepticism?

Yes, it is not always easy to explain. Measles, for example, is a serious accute infection during childhood, which causes one death in every one thousand infected persons. Some affected children are left with damages to the central nervous system, which can be very serious.

It is difficult to understand why the acceptance rate of a truly effective vaccine is not significantly higher. I call this a big scandal! Basically, all doctors, guardians, parents and teachers must know that something has to happen here. If it does not happen, we will have epidemics with infections that could have been prevented by a vaccination.

What is the situation with papilloma viruses and cervical cancer?

Here, the situation is different because this is a disease that is mainly transmitted through sexual intercourse, which means that 15- to 50-year-old women are mainly at risk. In this case, the vaccination must take place before the first sexual contact. There is a lot of educational work to be done, as many parents are afraid to talk to their teenage daughters about sexually transmitted diseases.

Cervical cancer is an extremely unpleasant disease, which used to be one of the most common cancers in women, but numbers have been reduced with the help of early detection techniques.

How high is the vaccination rate in a European or international comparison?

In some European countries the vaccination rate is even lower than in Germany. But there are some countries where it has risen very significantly: Above all, England was a pioneer. Outside of Europe, Australia has excelled in a very special way by reaching at least 80 percent of the concerned age groups through school programmes.

Things are also going well in the Netherlands and in the Scandinavian countries, but in many other European countries, the vaccination rate is very low. Overall, there is a need for a continuous flow of information. Above all, this is a challenge for doctors and health authorities.

Why do you demand that boys should also be vaccinated accordingly when they cannot get cervical cancer?

All over the world, young men aged between 15 and 45 have far more sexual partners than girls in the same age group. They transmit the infection relatively easily without developing cervical cancer themselves.

But men can develop the rarer penile cancer or cancer of the external genitalia or, above all, cancer of the throat caused in part by the same viruses that are involved in cervical cancer.

There are also great reservations against vaccinations for ideological or religious reasons in countries, such as Pakistan. Some vaccination teams even have to fear for their lives. Can education make a difference here at all?

There are actually very few areas of polio infections left in Pakistan, where vaccinations used to be relatively good. I think some of the politically active groups fear that Western influence is infiltrating Pakistani society too much and they have therefore turned against vaccinations. The fact that this is happening, is very sad, but we somehow have to live and cope with it.

Polio has been virtually eradicated worldwide, with the exception of Pakistan, Afghanistan, and Nigeria, and more recently, Papua New Guinea (Editor's note). If the vaccination programs were also implemented there, we would have a realistic chance of eradicating polio completely.

The public is unsettled by misinformation or myths that are mainly spread via the Internet. How dangerous are vaccinations really?

False reports about side effects have often been spread. These events either did not occur at all or were very mild on closer examination. I do not rule out the possibility that some vaccinations have had serious side effects in the past. Especially the rabies vaccination, which is much safer today. There is no vaccination that is completely without side effects. However, the extent to which the side effects occur must be taken into account.

For example, based on Australian data, papilloma virus vaccinations induce serious side effects in one per 100,000 vaccine doses, not including redness or a little fever after vaccination. Severe side effects mainly include serious allergies, which can occur against the protein in the vaccine, but which are easy to treat. And as I said, it only affects one in 100,000 people.

The interview was conducted by Alexander Freund

Measles infections have skyrocketed in Europe with 15 countries reporting large outbreaks in 2017, according to the World Health Organization. The WHO is concerned by low rates of immunisation against the disease. (19.02.2018)

The 2022 winners of one of Europe's most prestigious innovation awards have been revealed. Some of the highlights included upgraded batteries and cancer vaccines.

The success of mRNA vaccines in fighting against the SARS-Cov-2 virus has pushed the technology into the spotlight. It's also showing promise in fighting cancer. Our reporter Christina Küfner finds out more from oncologist Niels Halama.