The EU and Ukraine are planning an association agreement, but a major sticking point is the imprisonment of former Prime Minister Yulia Tymoshenko. Diplomats still hope Ukraine will sign by the end of next week. 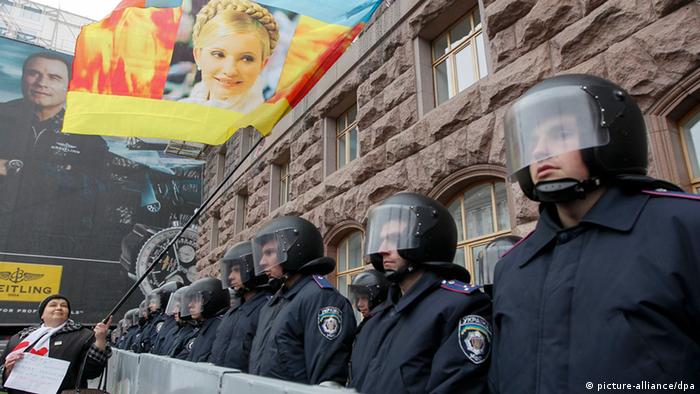 Ukraine will have one more chance to meet the EU's conditions for signing an association agreement. On Monday (18.11.2013), European foreign ministers in Brussels left it open as to whether an agreement with Ukraine would be signed by the end of next week at the summit with the EU's eastern partners in the Lithuanian capital Vilnius.

"It's not yet possible, but it's not excluded in the future - so there's not much time left, but there is some time, so we will see," said Lithuanian Foreign Minister Antanas Linas Linkevicius, whose country currently holds the rotating EU presidency.

The European Union has urged the Ukrainian parliament to enact promised reforms to its electoral law and judiciary. "There are some laws in the works, some past first reading. They have to accomplish this," Linkevicius warned. "They have to show progress, tangible results, and then we will be able to discuss this."

Tymoshenko should be allowed to leave 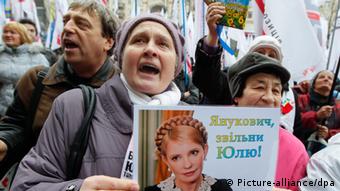 For many, Yulia Tymoshenko is a symbol of opposition to the Yanukovych government.

The EU says there must be progress, especially in the case of Yulia Tymoshenko. The former prime minister, jailed for two years, should be allowed to leave for medical treatment in Germany. The EU views the sentence against the opposition politician as the politically motivated judgment of a non-independent judiciary.

On Tuesday, the Ukrainian parliament delayed a debate about Tymoshenko until Thursday. Over the past few days, EU negotiators and mediators have been in Ukraine, German Foreign Minister Guido Westerwelle said after the consultations in Brussels: "We are sure that all sides in Kyiv have recognized the seriousness and the urgency of the situation. I wish to emphasize the urgency, because time is of course running out."

For 16 months, the EU and Ukraine have been negotiating the conditions that are intended to lead to the signing of the partnership agreement. Former Polish President Aleksander Kwasniewski and former President of the European Parliament Pat Cox have traveled to Kyiv 23 times. 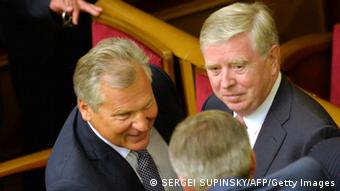 Aleksander Kwasniewski and Pat Cox have been constant visitors to Kyiv

Kwasniewski, whose country borders Ukraine, is not giving up hope: "I've been working with Ukraine quite a long time, since independence. I can say that in my cooperation with Ukraine that on Mondays, Wednesdays and Fridays I'm an optimist. Tuesdays, Thursdays, and Saturdays, I'm a pessimist, and Sundays I'm thinking what will happen next week."

Westerwelle hopes that the mediators will still be able to convince the Ukrainian president. "It would not now be helpful to present ultimatums or say things that could be construed as a threat. This makes no sense and is more likely to complicate an already extremely difficult process even further. Which I obviously want to avoid," he said.

A choice between Russia and Europe

EU foreign ministers view the association agreement as a turning point. If Ukrainian President Viktor Yanukovych signs it, he will be firmly committing to move closer to Europe and democratic values, diplomats say. If he does not meet these conditions, he will end up in the Russian camp. 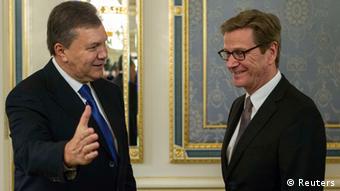 Meanwhile, Russian President Vladimir Putin wants to bind Ukraine more closely to his country. "Russians and Ukrainians will always be very close. We are part of the same people," Putin said in an interview in September. Russia is trying to lure Ukraine with low gas prices. In the event of a deal with the EU, however, Putin has threatened economic sanctions.

German European parliamentarian Werner Schulz, of the Green Party, warns Ukraine against turning East. "Russia is working with carrot and stick. On the one hand, there are incentives with economic aid and low gas prices. On the other hand, there is bare blackmail and threats," said Schulz on German public radio.

"This is only a taste of things to come when embarking on closer cooperation with Russia." Putin plans to revive the Soviet Union, Schulz said, "and that's the last thing the people in Ukraine want."

Later agreement not ruled out

If Ukraine does not sign the association agreement next week at the Vilnius summit because Yulia Tymoshenko is still in jail, the EU still wants to keep a back door open. Sources close to EU foreign policy chief Catherine Ashton say the negotiations could be resumed next year. It would still be possible to sign the agreement then.

It seems no one wants to let Ukraine drift into the Russian camp so quickly. Swedish Foreign Minister Carl Bildt said in Brussels that "everything is in the hands of President Yanukovych. We have a policy. I am not quite certain that he has a policy."

Former Ukrainian Prime Minister Yulia Tymoshenko's fate remains uncertain as the parliament cannot agree on how to handle her case. The issue will also be discussed at an EU foreign minister summit in Brussels on Monday. (15.11.2013)